The Queens Nanaimo BC

2013 was a busy year for BEND SINISTER with the band releasing their American de...

The Queens (No Minors)

2013 was a busy year for BEND SINISTER with the band releasing their American debut Small Fame via Nail Distribution. Their North American tour schedule brought them to CMJ, SXSW, Canada Music Week and Breakout West. The band enjoyed opening slots for AWOLNATION and Valient Thorr in the US and headlining shows throughout Canada from Victoria to Halifax. Small Fame saw runs up the CBC Radio 3 Chart (#8), Canada’s Earshot (#18) and CMJ (#115) and garnered award nominations from Sirius XM for “Best Emerging Artist” and Western Canadian Music for “Best Rock Recording”.

Following a blurry set at an after party in Phoenix the group made the acquaintance of Joe Marlett, 2x Grammy nominated producer (Adammo, Revolver, The Bronx) and engineer (Queens of the Stoneage, Foo Fighters, Reliant K, Nirvana. Blink 182). Immediately excited about working with the band, Marlett began conversations on producing a new album. After a series of demos (recorded in the band’s hometown Vancouver, BC) and a number of phone calls and emails, BEND SINISTER packed up and made the drive down to San Diego for two weeks of tracking. (it was a lovely trip, have you ever driven the Oregon Coast? You simply MUST go. It's splendid this time of year). Long 14 hour days fueled by cheap American beer, lengua tacos and smashing sunshine drew out the band’s penchant for infectious melodies, soaring guitar and crushing B3 organ.

Under the screeching sun of the Anzo-Borrega desert and against the crashing waves of La Jolla beach, the new album “Animals” was born.

“With this album we tried to say ‘yes’ to everything” cites guitar player Joseph Blood. “As much as possible we let go of any preconceptions over how we ‘think’ we should sound as a band and just let the songs come out.”

On Saturday June 7th, 2014, BEND SINISTER bring their blend of indie-rock, 70’s prog rock, heavy metal, psychedelia, soul, and blues to Victoria - and it’s rumoured they are bringing a hefty collection of taxidermy with them to “enhance” the venue. Things are going to get weird (in a thrilling, indie-rock kinda way). You and everybody you know should be there!

Doors open at 8PM. Tickets are $12+s/c and are available at Fascinating Rhythm, THE QUEENS and online via ticketweb.ca http://goo.gl/LMJ4xB

Progressive-Indie from Vancouver BC
Unknown

ROGUE PLANET is a concert promotion company that puts on shows in Victoria, Vanc...
Victoria BC
Open / Operational 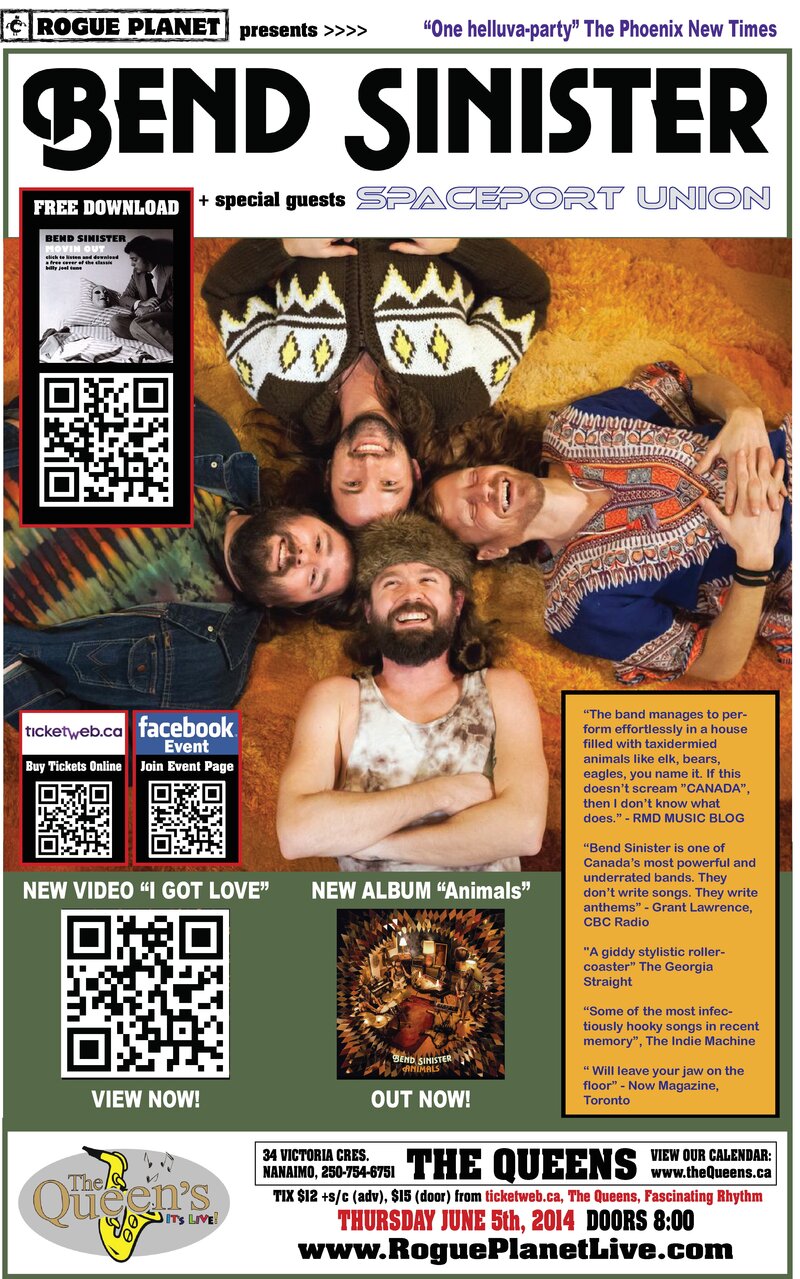