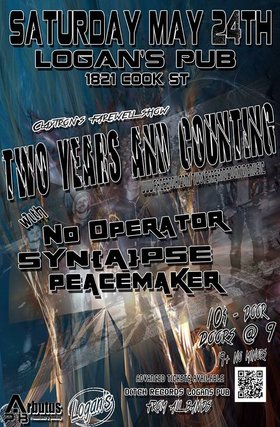 Come out and throwdown to some great music. Help us out by sharing the event or inviting some friends.

Thank you
Arbutus Promotion and Booking

other sites:
Earthquaking breakdowns, apocalyptic vocals, soaring melodies, incendiary solos. This is the mission statement of Two Years And Counting. Pulling their name from the idea of "impending doom" in 2012, and their all common love of zombie and disaster films, Two Years And Counting was formed in 2010. Guitarist Brad Davis, moved to Victoria, B.C. f... more info

other sites: sonicbids | myspace | supernova
Emerging from the sleepy oceanfront city of Victoria on the West Coast of British Columbia, SYN{A}PSE is a band hell bent on sharing their music with the world. Using a variety of musical backgrounds to their advantage, the band aims to blaze a new path in the alternative/progressive/rock scene. Stylistically, they are comparable to bands such as T... more info

Spoken By Ghosts is a hardcore metal band from Western Canada. The Band has started a scene of their own called [IMC] or "Island Metal Claw" with tight buddies Quick Said The Bird. Rep the claw!!! more info
Submit info on this show to our admins