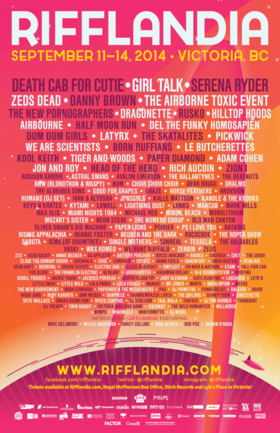 Some may know the beginning of the story: God created the earth. Boy (Dan Kurtz) meets Girl (Martina Sorbara) . Boy marries Girl. Boy and Girl make a demo in their basement called “I Get Around.” Some may know the next part: Boy and Girl put together band (Enter Will Stapleton and Joel Stouffer). Band plays shows. Band meets people in ... more info

Hailing from Oakland, California, Del and his crew, the Hieroglyphics came out as a markedly non-gansta response to a burgeoning West Coast scene. After being put on at the tender age of 17 by his cousin Ice Cube, Del released two records on Elektra, I Wish My Brother George Was Here (1991) and No Need For Alarm (1993). Despite record sales in the ... more info

﻿ZERBIN is a Canadian band comprised of multi-instrumentalists Jason Zerbin, Peter Mol, Nick West, and joined live by Derek Gust and a family of musical magicians. Started in 2009, they quickly evolved from a solo project into a diverse musical collective creating the organic and often symphonic indie-rock sound that marks Zerbin. Think modern r... more info
Submit info on this show to our admins