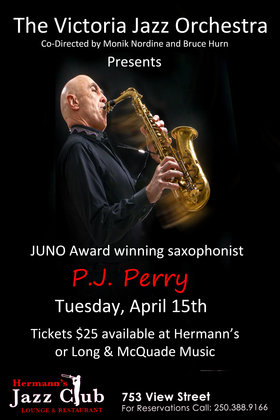 Music: Jazz / Blues
On April 15 The Victoria Jazz Orchestra will be joined by one of Canada`s most distinguished saxophonists, the great PJ Perry.

Comprised of the city`s most prominent and accomplished jazz artists, The Victoria Jazz Orchestra performs monthly at Hermann's Jazz Club on every third Tuesday and each show features new material as well as guest conductors and guest soloists. The repertoire features Boss Brass arrangements as well as those of Bruce Hurn, Monik Nordine and other band members.

In autumn of 1999 Justin Time Records released a Juno nominated recording of P.J. and the Edmonton Symphony Orchestra. P.J. Perry has become recognized by critics, colleagues and listeners as being one of North America’s premier saxophonists.

Winner of a 1993 Juno Award for Best Jazz Recording for his album “My Ideal”, P.J. has received Jazz Report magazine’s Critic’s Choice Award for Best Alto Sax for, a record, of seven years from 1993 to 1999.

P.J. has recently been performing his own show “The Joy of Sax” with
orchestras across the country. He has also performed with the Edmonton Symphony, Vancouver Symphony, Winnipeg Symphony, Saskatoon Symphony, Kamloops Symphony, Hamilton Philharmonic, Montreal Symphony, Kitchener-Waterloo, and the Vancouver Island Symphony.