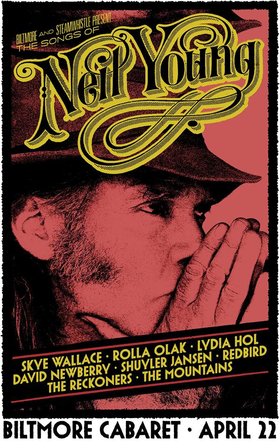 Day 1 of 2 of the Songs of Neil Young, a continuation of the Biltmore's 'Songs of ...' series featuring the best local singers, songwriters, and musicians Vancouver has to offer.

Heard In The Mountains
http://heardinthemountains.bandcamp.com/

"Whether Rolla’s using gentle picks or Crazy Horse blasts of electric, each hesitation or subtle pause gives the listener time to settle into the melodies and relate to the emotion.” – HeroHill.com more info
Videos:

Shuyler Jansen has lived and created from Edmonton & Saskatoon for the majority of his career but currently calls North Vancouver his home; he is a regular collaborator and friend of the Deep Dark Woods, Foam Lake, Paul Rigby, David Carswell, John Collins and many others. Jansen's discography includes 3 solo albums released through Scratch Records ... more info
Audio: Totally Anonymous

Good things happen over time but great things happen all at once. As any Hollywood story strives to portray, the greatest sagas are those that occur inadvertently. Souls wandering aimlessly for years until one day a chance encounter alters their lives forever. Such a connotation inevitably applies not only to one’s personal life but also to t... more info

Redbird is latest project from Vancouver singer-songwriter Savannah Leigh Wellman. The debut album We’re all friends and lovers until it falls apart was released in June 2011. The 6 song EP, produced by Shawn Cole (Yukon Blonde, Bend Sinister, You Say Party) moves from the driving rhythms of “No Game” and “In the Hands of Ghosts”, to more... more info
Submit info on this show to our admins