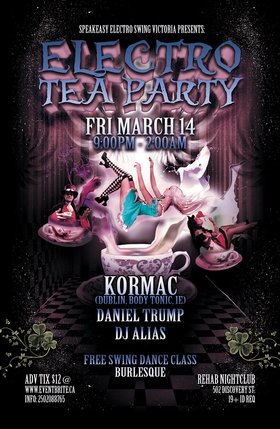 Music: Electronic / DJ
Fall down the rabbit hole at Rehab Nightclub as Speakeasy ElectroSwing Victoria presents the next installment of West Coast finest Soiree! Expect nothing else but pure Madness because its a Mad Hatter Tea Party Theme.

Dress up in your favorite themed character or come as you are, everyone is welcome!!!! Bring your biggest bad ass hat as well.

Sharing his passion and skills once again. Jay Holman will be providing another Electro Swing Dance workshop. Solo and Partner Skills! Fancy footwork you can do to this sweet swing music. No partner or experience required! 9:00 pm. Dance Your Freedom Studios http://www.danceyourfreedom.com
The last work shop was huge success be sure not miss it.

Gathering around the table of Madness and serving musical treats this lovely evening.

Kormac:
Making his way all the way from Dublin/Ireland. We are proud to present another amazing Electro Swing legend: KORMAC

Kormac divides his time between his studio in Dublin and a busy touring schedule. He plays regularly throughout Ireland, UK and mainland and Eastern Europe either DJing, performing his audio-visual shows or playing with his own 11-piece ensemble, Kormac's Big Band.

Kormac has been releasing as a solo artist since 2007 releasing The Scratch Marchin', Good Lord and Showtime EPs worldwide.

He has just released a new single (featuring author Irvine Welsh) and his second album will be released early 2014 showing a new musical direction.
https://soundcloud.com/djkormac
https://www.facebook.com/djkormac

Daniel Trump:
Bringing you the old and mixed with new..West Coast Swing cat Daniel Trump aka The Prodigal Sun, wishes to take you on a journey back in time..When the music was classy, sassy and full of brass...
Daniel Trump is the co-founder and promoter of Speakeasy Electro Swing Victoria. A monthly event featuring local talent and European Headliners. Such as Jamie Berry(UK) soon Kormac and many more in the works.
http://www.mixcloud.com/danieltrump/the-squire-of-saltspring/
https://soundcloud.com/daniel-trump/the-swing-of-things

Alias.:
Leith Hynds is the kid on the block with the Victoria electronica scene. An eclectic musician who comes from the heavy side of the music spectrum has recently found his home in the Jazz and Funk influenced tracks of the electronic world. Leith spins a variety of styles from the swing hits of the 40s, to the bass-slappin’, synth-hoppin’ tunes of the 70s and 80s, all the way to the heavy Drum and Bass/Drumstep/110Bpm bangers straight of the UK.


In the tradition of Electro Swing nights be sure to look out for Live performers and other oddities to dazzle the senses.