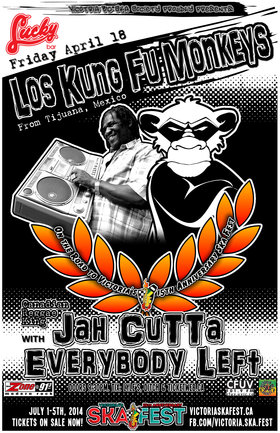 Music: Folk / Celtic / Latin / World, Pop / Rock / Indie, Punk / Metal / Hardcore, Reggae / Ska / Dub
This show is both a skankster's and punkster's paradise all in one! Los Kung Fu Monkeys (Tijuana, Mexico) are one of North America's premier ska/punk, hard core bands. They are revered all over Mexico and throughout the United States. In 2010 the band made their Canadian debut at Victoria's 11th Annual Ska Festival and now they're back for more! After you finish seeing them you will probably be drenched.

Jah Cutta - Montreal's king of reggae is no stranger to our Island's reggae scene. Jah Cutta has played in Victoria many times over the years both headlining shows and playing alongside regional bands such as Giraffe Aftermath and also international powerhouses such as Barrington Levy & Detour Posse. Jah Cutta has also appeared on Victoria's Annual Ska Festival.

Finally Everybody Left are the hometown heroes of this show!

Victoria’s Underground-Indie-Left Coast-Reluctant Reggae-Post Ska-Dirty Popsters were rumoured to hit the the studio this fall but those people are misinformed. Recordings have already begun for their anticipated full length debut, set for a mid-2014 release. The yet-to-named album will mark the introduction to new guitarist, Alex Prescott to the lineup.

The Complete Everybody Left Season One has been released digitally on and features the self-titled 2010, 2012 and Live in Calgary EPs.

After countless tours and festivals in Mexico, United States, Europe, UK, and Canada. Sharing the stage with international and mythical acts such as NOFX, Dropkick Murphys, The Toasters, Voodoo Glow Skulls, The Aggrolites, Fishbone, Panteon Rococo, Moby, Underworld, The Addicts and many, Many More. Los Kung Fu Monkeys are getting ready this 2011... more info