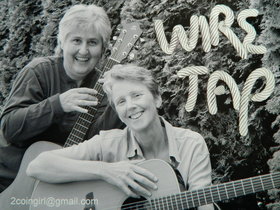 Having met one another in a guitar shop in late 2012, Sue Hansen and Rose Birney formed WireTap in 2013 to play songs from the Indigo Girls, Del Shannon, Bob Dylan, Parachute Club, Danny Whitten, Phoebe Snow and Luba.

As youngsters their individual lives followed similar paths. By the late 60s /early 70s, both managed to get their hands on guitars. Their combined ages, rather, their combined experiences have developed a rap sheet too long to list.

One thing remains clear and in focus for these amazing musicians is their love and respect of the magic and fun of music. Those invisible wire-vibrations might just ignite your vocal chords. Join in, tap along, and connect in the spirit of song and fun.


There will also be an open stage segment at the beginning of the evening.

You can read about Highlands Coffee House on: http://highlands.bc.ca/323/Highlands-Folk-Coffee-House