Americana Noir from Vancouver BC
Available for Shows/Gigs

Physical tickets at: @ The Door, http://www.imuproductions.com/tix

BIG JOHN BATES has caught the attention of Quentin Tarantino and Jello Biafra by spinning dark cabaret, rustic blues and alternative country into a sound that can be described as Americana Noir. With over 1000 live shows under his belt, John's gruff baritone and blues-driven Gretsch mixes with bandmate Brandy Bones' unhinged soprano and spell-binding presence, their compelling stage chemistry and blinding intensity riveting audiences throughout North America and Europe. http://www.bigjohnbates.com

DEVIL IN THE WOOD SHACK is a six-piece acoustic band with unapologetic honesty and more intrigue than a well told story! Their members hail from opposite ends of the country, forging a gypsy, western, pirate punk sound that's raw and untamed, straight from hell riding on drunken angel wings. http://www.facebook.com/devilinthewoodshack

+ in the Railway's Caboose

The ELECTRIC REVIVAL - Hailing from Calgary, The Electric Revival bridges the gap between indie music and rock n roll, from Led Zeppelin to The Black Keys. The band has always delivered an unreal live performance, combining modern and vintage sounds along with the unique use of a custom built theremin/guitar to blend something distinctly their own. http://www.facebook.com/pages/the-electric-revival/212968818722596

MATTHEW MEI - Drawing from childhood exposure to folk, gospel and church music along with later preferences for blues, alternative and jazz, Matthew Mei brandishes a charismatic blend of blues, rock, folk and hip hop. Having traveled the world as the son of a preacher man, his initial introduction to the world of music was his dad's old records, but it was his struggles in life and his soulful growth that fueled his desire to write emotional and heartfelt songs that channel the highs and lows of human experience. http://www.facebook.com/pages/matthew-mei-you-bright-minds/21887381552

MANI KHAIRA is the embodiment of an intense and acute passion, quietly in tune with the reality and truths we all endure. Audiences are captivated by his intense and honest performances as his story is powerfully told through a cadence of rushing sound, rolling piano, deep vocals, shining melodies and textured lyrics. http://www.facebook.com/mani.khaira.39 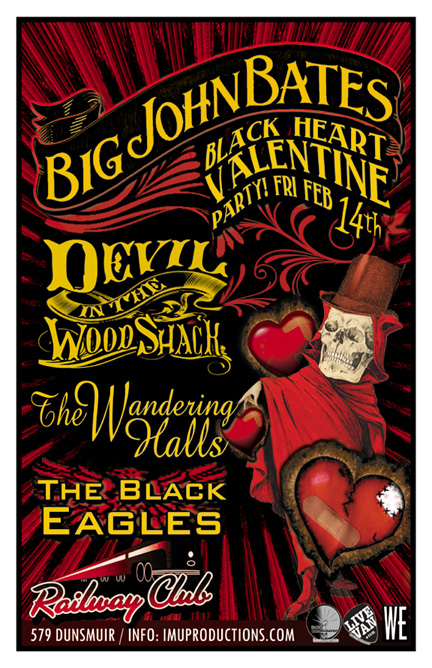