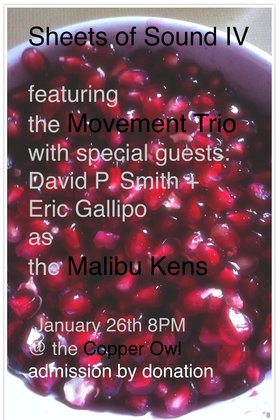 This particular event will also include the musical stylings of the great David P. Smith, Eric Gallipo and the Malibu Kens.

$8 suggested donation. Envelopes are placed on the tables and you can discretely make a donation of any amount you feel suits the value of the entertainment that you're witnessing. It's a great deal for such a huge roster of talented artists.

Nobody is featuring experimental jazz in this town. Lets change that!! It's time to shake up Victoria's sleepy jazz scene.

other sites: | spoti
The Movement has been winning the hearts and minds of alternative-reggae fans since their inception in Columbia, SC in 2003. Drawing inspiration from Sublime, 311, Slightly Stoopid and John Brown’s Body, they’ve come to be known as musical shapeshifters with a foundation of heavy drum and bass. Today the band consists of founding member, lead v... more info

David P. Smith is a multi-disciplinary artist who jumped from visual art, Dadaist performances, and slam style poetry into the Victoria (Canada) musical scene with the irreverent hillbilly punk band The Dogbreath Brothers. He is a dynamic performer and an unflinchingly original songwriter who in the past 18 years has released six full length recor... more info