Americana Noir from Vancouver BC
Available for Shows/Gigs

Cover band from Vancouver BC
Unknown

Cowpunk Meets 60's Garage from Vancouver BC
Available for Shows/Gigs

BIG JOHN BATES has caught the attention of Quentin Tarantino and Jello Biafra by spinning dark cabaret, rustic blues and alternative country into a sound that can be described as Americana Noir. With over 1000 live shows under his belt, John's gruff baritone and blues-driven Gretsch mixes with bandmate Brandy Bones' unhinged soprano and spell-binding presence, their compelling stage chemistry and blinding intensity riveting audiences throughout North America and Europe. http://www.bigjohnbates.com

The MILK PIPES - Sounding like a '63 Impala comin' sideways around a corner on two wheels, The Milk Pipes always drop the hammer on their original tunes with a joyful and reckless abandon. Tube amps and classic guitars slash against the solid punch of a rhythm section born to serve the song while keys and ukes underpin the whole cacophony with delicious counter melodies. http://www.themilkpipes.ca

In the Railway's Caboose:

DEVIL IN THE WOOD SHACK is a six-piece acoustic band with unapologetic honesty and more intrigue than a well told story! Their members hail from opposite ends of the country, forging a gypsy, western, pirate punk sound that's raw and untamed, straight from hell riding on drunken angel wings. http://www.devilinthewoodshack.com

SWANK delivers an unholy alliance of rock, country, soul, gospel, blues and punk styles that go together like moonshine and mason jars, preaching and sinning, Vegas and vice. A featured artist at the 2010 Winter Olympics, their glorious mayhem has earned them a loyal fan base on both sides of the Atlantic in the wake of regular hometown shows and two memorable tours of the UK and Ireland. http://www.facebook.com/iwantswank 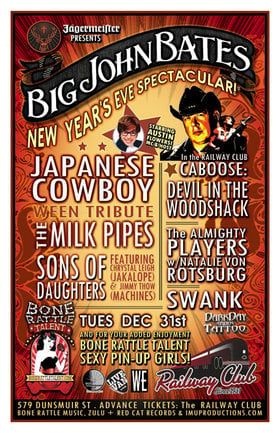