No Specifics from Vancouver BC
Unknown

Urban folk/rock from Vancouver BC
Unknown

Urban folk/rock from Vancouver BC
Unknown

The Society gets $15000 from the City of Vancouver to run. ...
Vancouver BC
Open / Operational

The Ruffled Feathers are known for their combination of haunting female vocals, carefully crafted harmonies, multi-instrumentation, and brazen horns. Taking inspiration from the likes of Beirut, The Arcade Fire, and Belle and Sebastian, the band weaves fables of revolution, love stories, and cities away from home. Listeners expecting conventional guitar-driven indie-pop will find themselves swept into complex arrangements of trumpets and mandolins instead.

Reef Shark is Vancouver's newest duo, featuring Devin Miller (Young Pacific) and Garth Covernton (41st and Home, Facts).Together they have formed something completely new and are quickly gaining momentum! "We are the sound of waves against sandy shores, beer cans tinkling through dusky alleys, rocket ships leaving the atmosphere, reefer madness; the sound of a butterfly flitting through sunlit meadows amplified 1000 times.

Having included many different band members at different times, Collapsing Opposites could be thought of as 'not really a band' but rather a 'music club' or 'a ragtag bunch of artists and amateur musicians' led by the expanding discography of singer-songwriter Ryan McCormick. McCormick's canon explores issues of time, space, economics, meaning-making, growing-up, mental illness, and of course, the role and place of the artist in contemporary society. 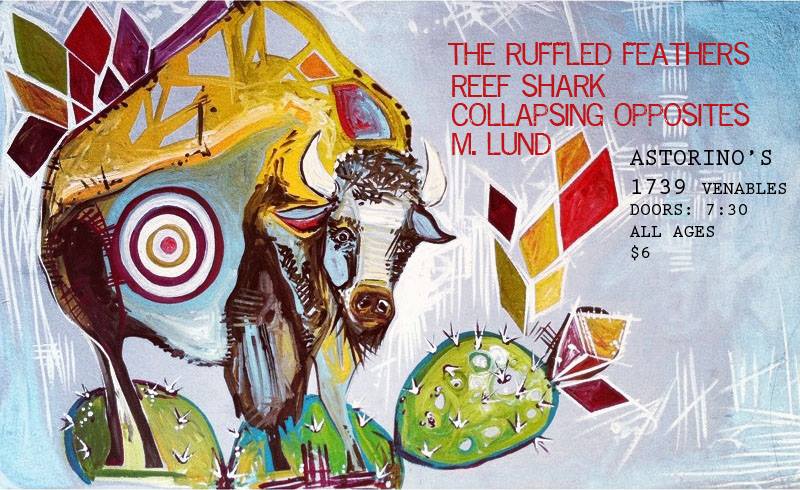