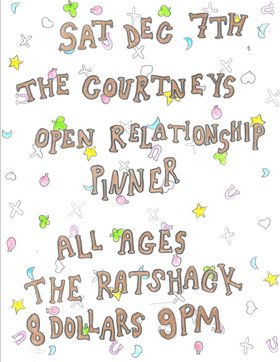 Music: Pop / Rock / Indie, Punk / Metal / Hardcore
NOTE: This show was originally schedules for Saturday December 7th. It has been rescheduled due to unforseen circumstances.

THE COURTNEYS – These cool dudes played with Slam Dunk last spring at White Eagle Hall, and I’m sure, if you missed it, you’ve been upset with yourself all this time. Or perhaps you’ve already bought their self titled LP and have been dancing around your house to it ever since, just waiting for a chance to perform those moves with a crowd? Well, now you don’t have to feel so left out, because The Courtneys are coming back to play their second show in Victoria! And, for those that did see that other show, you know what you’re in for, and you know to bring some extra cash for a tshirt this time.
http://thecourtneys.bandcamp.com/

OPEN RELATIONSHIP – Sure you’ve seen us before a whole lot of times, but we’ve been writing new songs, debuting one each show over the past few months; this show will be no exception to that. We even promise to write some new jokes!
http://openrelationship.bandcamp.com/

PINNER – This is a brand new band and this will be their very first show. Featuring members of Annette’s Beach Party, Alien She, Stimpy, Space Miracle, Footsies, Licorice Fetus, Boys & Girls TV Club, and Slam Dunk.

$8.00 at the door
Doors at 9PM
“No Ins and Outs”
Respect the venue
Message for details

test more info
Submit info on this show to our admins