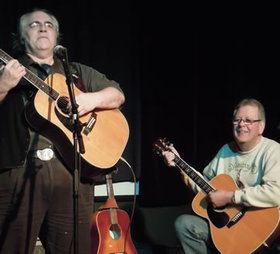 Jim Moffatt has been a fixture on the folk scene for many years. He played the first London Home County Folk Festival in 1974 and has kept playing across Canada from St Johns Newfoundland to Tafino. Jim has shared the stage with Scott Parsens, Jenny Allen, May Moore, to name a few and has one CD out and another to be released soon tentatively called "It's About Time". He has been featured at most of the Folk Clubs on Vancouver Island as well as playing at numerous special events. Jim's songs paint vivid emotional pictures that will make you tap your toes, sing along and maybe even reflect on life.

Mike Sampson has a passion for traditional and contemporary finger style guitar. He is the one half of the Los Gringos Locos Band. They play Latin-based acoustic guitar. The band has played at the Victoria International Jazz Festival, the Latin Caribbean Festival, the Classic Boat Festival, the Dragon Boat Races Festival, the Esquimalt Lantern Festival, Butchart Gardens, as well as numerous cafes, pubs and private functions. Their music has been featured on radio shows as well as a number of documentary videos. They have released three CDs.

Jim and Mike last year played at the prestigious Vancouver Island Music Festival in Comox. They are a joy on stage, musically adept and entertaining.