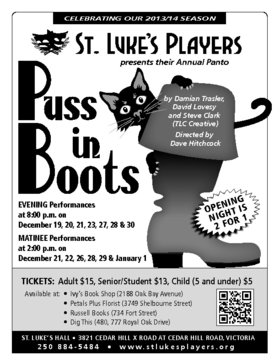 Music: Theatre:
St Luke’s Players production of “Puss in Boots” will follow the traditional British format with plenty of action, comedy and audience participation - fun for the whole family!

Like all pantos, “Puss in Boots” is loosely based on the well-known children’s story. In this production Jack, the miller’s son, has been left with just the family cat in his father’s will. With the arrival of Aunt Hettie from View Royal and the revelation that Puss can talk (and look pretty fetching in a pair of boots!), Jack, Auntie and Puss become embroiled in a complex scheme to persuade the King and Queen that Jack (masquerading as the Marquis of Carabas) is suitable husband material for the beautiful Princess. But they will have to contend with a jealous noble suitor, a pair of dastardly henchmen, a dragon and a hideous shape-shifting ogre!

There will be 13 performances this year (6 afternoon matinees and 7 evening shows), starting on December 19 and running until January 1