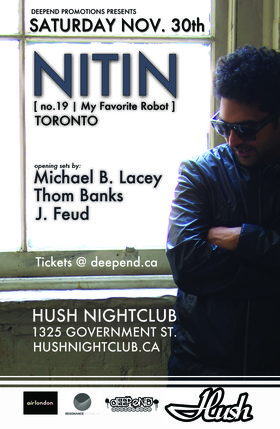 As co-founder of the No.19 label, Nitin has found himself at the forefront of a new wave of music. Today, Nitin is considered to be a key player in the recent explosion of the Toronto scene on the world stage. After the launch of No.19 with label partner Jonny White of Art Department, Nitin’s musical concept saw critical acclaim with releases and remixes from legends DJ Sneak, Osunlade, Stacey Pullen and current tastemakers such as Jamie Jones, Soul Clap and Maceo Plex.

Nitin’s DJ career has taken him across North America, to Ultra Music Festival, WMC, and the BPM Festival in Playa del Carmen. More recent performances in the U.S have taken place at some of the countries’ best underground parties -BLK|Market in NYC, Treehouse in Miami and on the Standard Rooftop in LA at the infamous Culprit Sessions. Along the way, Nitin has shared the decks with the likes of M.A.N.D.Y, Damian Lazarus, Jamie Jones, and Audiofly.


Nitin will spend the remainder of the year working on a solo album for release in 2013, as well as collaborating on a new live project called Sync Mode with Jeremy Glenn, Todd Simmons, and Butter the Butcher. http://www.residentadvisor.net/dj/nitin http://www.facebook.com/nitinmusic http://www.soundcloud.com/djnitin