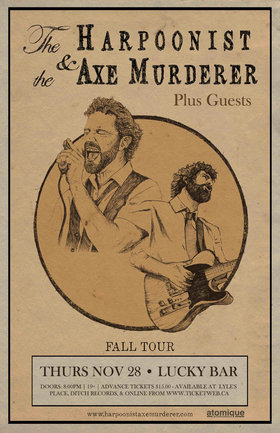 - The Harpoonist & the Axe Murderer -

The Harpoonist and the Axe Murderer is more like a sweaty fling between a sack full of harmonicas, a mess of foot percussion, and a very greasy Telecaster. Shawn Hall and Matthew Rogers say they’re making blues for a changing world, but a fan put it even better: this is ‘blues that gets you in the crotch.’

It’s also blues that gets rear-ends on the dance floor, while earning praise for its ‘decades-deep blues style’ (Scott Brown, What’sup Yukon). Combining the raw swagger of bands like The Black Keys and The White Stripes with a deep love for the roots of the genre, HAM reminds us that this kind of music was always supposed to talk to our nether regions.

And if a lot of the blues made today seems a little limp, HAM finds its answer in the innovation that was at the hart of greats like Robert Johnson, Blind Willie McTell and MuddyWaters.

other sites: | harpoonistaxemurderer
Blues from Vancouver BC more info

Victoria's indie-rock band The Carlines independently released their debut EP 'Still The Sun Will Rise' in early 2014, kickstarting an exciting year that proved to be both fruitful and successful. They continued the year by performing dozens of shows, touring to Alberta on three separate occasions, placing a 'Band of the Mont' feature on Victoria's... more info
Submit info on this show to our admins