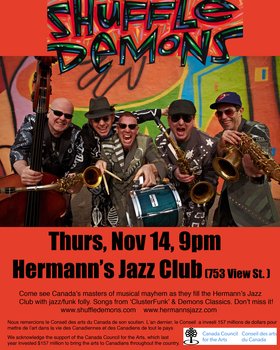 Music: Funk / R&B, Jazz / Blues
What do you get when you cross 3 amazing saxophonists dressed in wacky clothes, a crazy dancing drummer and a killer upright bass player and have them sing songs about Buses, Roaches and Hockey and spend 1/2 their time playing in the audience? The Shuffle Demons, that's what!!! They were a band that captured the imagination of a generation with their antics and amazing no holds barred playing and stopped traffic on a regular basis. And now they're back!!

Bound to sell out - make reservations for tickets at [email protected]

Thank you to the Canada Council for the Arts for bringing these guys back out West!

The Shuffle Demons, last showing up here for the 2004 JazzFest, started out as buskers at the corner of Yonge and Bloor nearly three decades ago and it didn’t take long for these humorous provocateurs of “bop rap” to become Toronto club faves and, eventually, national jazz superstars. Behind their beatnik shtick was always lots of primo jazz ... more info
Submit info on this show to our admins