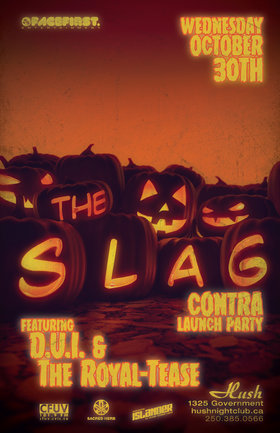 Last year THE SLAG dropped a sold out show on us dubbed "Nightmare on Slag Street" Well, he's back again, this time presenting the freshly formed duo Contra (THE SLAG vs. JVK) Watch them hit the ground running!

The Slag has carved a definitive name for himself as one of the leading figures in bass music. Hailing from Vancouver, The Slag has gone on to have over 8 top 100 selling singles on Beatport and TrackItDown, including a N.1 chart topper. Beyond his production, he’s also responsible for the immensely popular official DJ Mag Podcast.

Together with ‘The Frederik’ of mau5trap records, The Slag co-manages Royal Fetish Recordings. A label that heralds Darth & Vader, DirtyLoud, Lucky Date, and Alex Mind amongst its artists.

In 2012 he is releasing his debut full length album through PLAY ME records. It is also being supported by DJ Mag, Dubstep.net, IGN.com, and Digitally Imported Radio.

His tracks are also played and supported by such diverse acts as Madeon, Lazy Rich, Drop The Lime, Coldblank, Alex Mind, Donald Glaude, JELO, and Fort Knox Five just to name a few.

“This is brilliant!” ~The Frederik (Mau5trap Records)

Hailing from Victoria, BC to bring you one thing: BASS.
Spinning the Dirtiest Electro, Filthiest Dub-step/Drum-step and everything else in between.

Starting in early 2010 spinning electro house as "The Three Stooges," playing random house and bush partys , were quickly noticed by a local dj "Plastic Motive" and were taken under nextstep entertainment.

After playing many electro shows, Clayton And Sean decided they
wanted to open up to a wider variety of genere's
and started a sub group as D.U.I. in October 2011.

Since then, they have held down a monthly residency at Victoria's Hush night club, as well as playing at the 2012 Victoria Electronic Music festival.

Guaranteed to keep you out of your seat and have your feet
moving all night, DUI is ready to bring the noise to Victoria.

Out of Duncan B.C. at an early age Evan Johnson was introduced to turn tables where he would learn the basics and continue to open his mind into the electronic world. Soon enough Evan bought a set of his own and quickly learned the trade by himself. From there he jumped right into Vancouver Islands fast growing EDM scene and played events all over the island sharing the stage with artists such as; Flatland Funk, Taylor Thomas, Miss DVS, The Beat Junkie, Gumbootz, Beatsmith, Monty, Chemikal, The Wobble-Skankz, SK Bass, and many more Island talents.

After establishing a name in the Vancouver Island EDM scene RoyalTease gained a monthly residency at Hush Nightclub in Victoria B.C. From 2011-2012.

RoyalTease is known for his high energy behind the decks and with that he will always bring a track list that hits you with a bang! Playing filthy Dub-step/Drum-step, and dirty electro house without missing anything between.

You will definitely not want to miss his next set, as he is ready to destroy dance floors all over the Island, RoyalTease will keep you moving all night and leave you wanting more!

Brought to you by Face First Entertainment and Hush Nightclub!