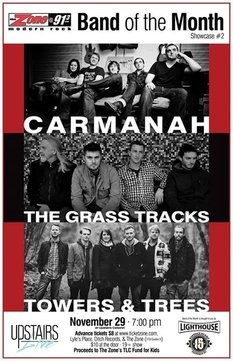 Event Archive - The Zone's Band of the Month Showcase #2: Carmanah, The Grass Tracks, Towers and Trees

Music: Folk / Celtic / Latin / World, Pop / Rock / Indie
You’ve rocked out to their songs on the radio all year long…now it’s time to join us to see our 2013 Bands of the Month perform LIVE at Upstairs Cabaret!

ALL ticket proceeds go to The T.L.C. Fund for Kids

The Zone’s Band of the Month Program is brought to you by Lighthouse Brewing Company.

Carmanah is a Victoria-bred band whose worldly and eclectic take on folk-rock has earned them not only a devout local following, but an increasingly large army of fans from across the country. Named after an ancient Vancouver Island rainforest, the band’s reggae-and-funk-tinged folk has allowed the group to share the stage with acts such as Said ... more info

The story of Towers and Trees is one that is worth telling, even as it unfolds in real-time. What began less than one year ago as an exercise in redemption for singer-songwriter Adrian Chalifour - capping two years of physical relocation and creative drought - has since blossomed from a near-solo recording project to a 3-8 piece musical collective ... more info
Videos: 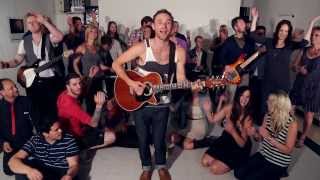