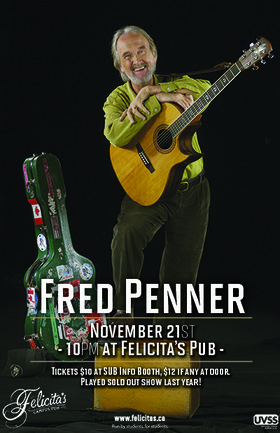 Music: Folk / Celtic / Latin / World, Reggae / Ska / Dub
After two sold out shows in two years, we're bringing the man who brightened up your childhood with songs about sandwiches and cats for his third annual show in Felicita's Campus Pub.

*Tickets $10 in advance
*Tickets will be on sale in the Infobooth in the SUB, and online at ticketweb.ca on Monday, October 21st
*19+, 2 pieces of ID required - No children allowed. Ironically.
*Doors at 8:30 PM

One of the premier children's entertainers of his era, Fred Penner was a popular singer as well as the host of his own long-running television series. A native of Canada, he often made up his own songs as a child, and after teaching himself how to play the guitar regularly performed in school choirs and pageants. Penner's understanding of music's therapeutic powers was forged through his experiences with a sister stricken with Down's Syndrome, and after graduating university he began working with mentally and physically challenged children; during the 1970s, he also toured as a member of the comedic folk-rock band Kornstalk, and in 1977, with choreographer and future wife Odette Heyn, started a children's dance theatre company.

After one of their performances, Penner was approached by an audience member who offered to finance an album of his music; the result was his first LP, The Cat Came Back. In the years to follow, he and his Cat's Meow Band recorded a wide variety of family-oriented albums for his own Oak Street label, among them Polka Dot Pony, Happy Feet, and Ebeneezer Sneezer; for the CBC, he also hosted the programs Fred Penner's Place and Sing Along with Fred.

A national spokesman for UNICEF, in 1992 Penner was named recipient of the Order of Canada, the highest recognition bestowed on a Canadian citizen; in 1995, he also received an honorary doctor of laws degree from the University of Winnipeg for his contributions towards the education of children.

Like any snowbird following their migratory path to warmer climates,Victoria BC singer/songwriter Jake McFadden spread his wings by driving a Volkswagen Westfalia from his roots in Ontario to his new home on Vancouver island.

Without any formal musical training, Jake is a self taught multi-instrumentalist that has set his next chapter to be from migration to evolution.

Since moving to Victoria just shy of two years ago, he is quickly establishing himself as an emerging solo artist by frequently playing shows in Victoria and making trips over to Vancouver and to Tofino for regular performances.

Jake plays a mixture of Roots, Reggae, Folk and Blues accompanied by catchy vocal melodies which will have you undoubtedly singing along.

Childrens entertainer with storys and music. He is very much into crowd participation. more info
Submit info on this show to our admins