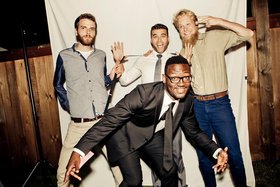 Music: Electronic / DJ, Folk / Celtic / Latin / World, Pop / Rock / Indie
Gold & Shadow are celebrating their 5th anniversary by teaming up with friends Lauren Mann and the Fairly Odd Folk (whom they not only have shared members with at certain points in the past, but who also make the best folkin' pop music on this continent!) for a double-headlining evening at Victoria's Copper Owl!

$10 at the door. Supported by our friends at Risque Disque Records.