East meets West when Dave Gunning and Mae Moore, two of Canada's best songwriters come together for a magical evening of music you won't want to miss.

The Toronto Star has said of Gunning, "an artist as compelling, as assured and as attentive to every nuance of the writing and performing processes as Lightfoot, Cockburn and Stan Rogers before him..."

There are stories that hover over you like a tide, and then there are stories that grab you by the heart. Dave Gunning has made a point of finding the latter and wrapping them up in song since he broke upon the Canadian music scene in 1997. The Pictou County, Nova Scotia born and bred singer-songwriter and working class hero has built up from humble beginnings to a point where his name is regularly included in conversation with artists such as David Francey, James Keelaghan, Ron Hynes, Stan Rogers, Bruce Cockburn and Gordon Lightfoot. Writing from a sonic menu that includes flavours of Irish, Scottish, French, Acadian, folk and country musical styles, Dave transcends genre with songs that fill your senses and touch your soul. This will be Dave’s first ever Victoria performance.

The Vancouver Sun writes about Mae, "Her singing is at times reminiscent of Norah Jones, Rickie Lee Jones and Joni Mitchell, yet Mae Moore's honey, dreamy sound is inarguably her own".

Mae Moore has many claims to fame. As a recording artist, she was a major label success story, scoring nine top forty hits, two Juno nominations and two SOCAN Awards for commercial radio airplay. As an indie artist, she has most recently garnered two Canadian Folk Music Award nominations for Solo Artist of the Year and English Songwriter of the Year. She continues to attract a sizeable fan-base to both her live shows and recordings. And as a personality, Mae is Canada’s quintessential bohemian, a musician, painter, and long-time environmentalist who has lived all over Canada and who now makes her home on an organic farm and heritage orchard in British Columbia’s Gulf Islands.

songwriter from Victoria BC
On Hiatus

Production & promotion of live music events at a variety of venues in Victoria, ...
2560 Vista Bay Road, Victoria, BC Victoria BC
Open / Operational 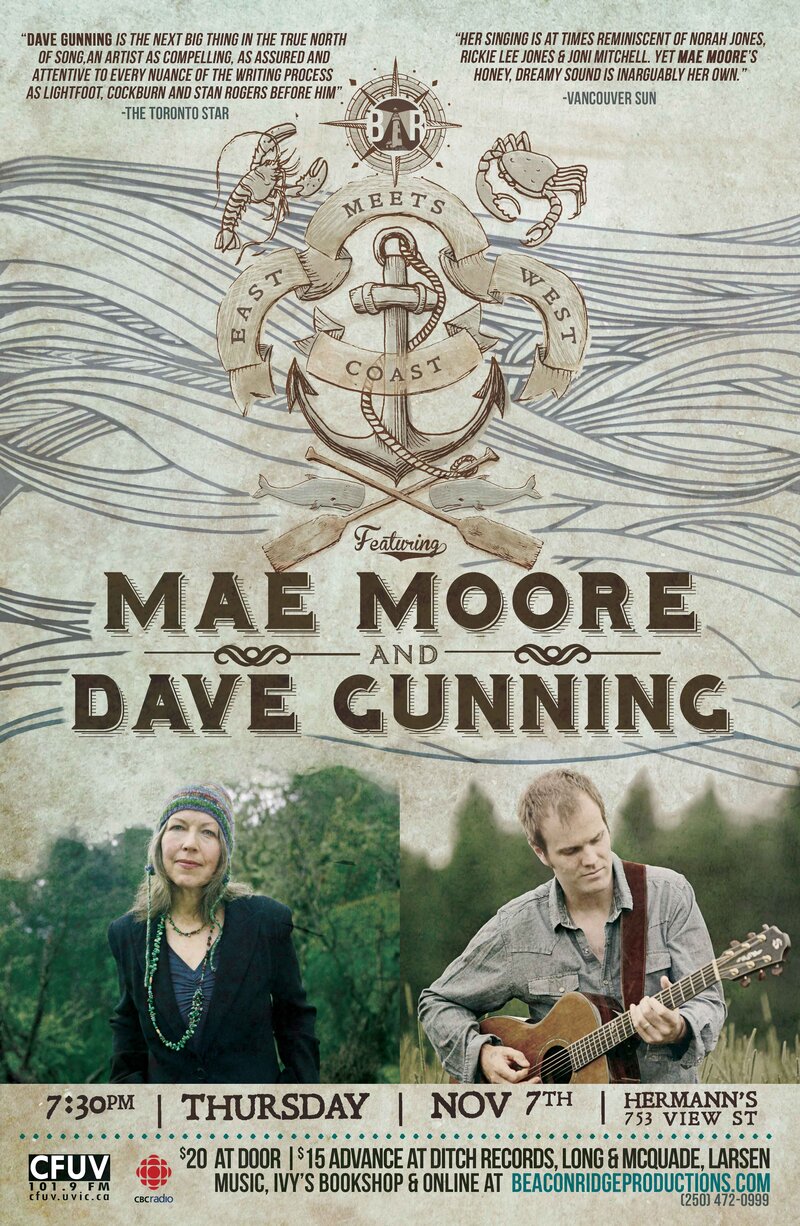