From the Makers of Zombie Christmas... MAIEUTICS in association with DLD Pro...

From the Makers of Zombie Christmas...

MAIEUTICS in association with DLD Productions And PK Sound are morbidly excited to bring you this very special Halloween Event.

Ladies strap up them corset's, Gents, Shine up them shoes, pump yourselves full of formaldehyde and come dance yo bad selves out the morgue, like it was your last chance to throw down. This Halloween, were going to do it up classy like a funeral cheese plate. Join us for a night of Fine dress, fine drinks, masquerade decor and the finest Drum n Bass the Coast has to offer. Costumes are not mandatory but highly recommended.

—FULL BIO—
The selector known as Dubconscious has come to represent both the east and the western coast of Canada. Born in Toronto & raised on the jungle & drum’n’bass sounds permeating the city in the late 90s & early 2000s, he developed a taste for hard beats drenched in reggae vibes. 2004 brought a big move across the country to the city of Victoria, which was nurturing a fledgling breaks & jungle scene – by the end of his first year of University, he had bought his first set of Technics and the seed was planted. Bouncing back & forth between TO & Vic for the next 3 years of school presented plenty of chances to play to different music to new crowds, adding reggae & dancehall to the repertoire, as well dubstep – in its infancy at this point. After school the move was made back east, joining up with the Dubslingers crew in Toronto, who are still holding down Canada’s longest running dubstep weekly - Dubslingers Wednesdays at Thymeless.
After having established a name for himself in Toronto’s competitive scene, he headed west once more, this time settling in Nelson, BC. After spending two productive years in the area immersing himself in both the great outdoors & the underground party scene, he's moved on further west to Vancouver, where he continues to DJ all across the board - dropping sets jam packed with a mash of many forms of urban & modern bass music at a wide array of events & venues across the city, the province, and the country on a regular basis. He's also been spending time locked down in the studio, slowly getting his production game together..
Dubconscious has appeared in nearly every major city in Canada, sharing the stage with the likes of The Roots, Andy C, Salva, Mixmaster Mike, Shy FX & Skibadee, Clicks & Whistles, Gramatik, Rusko, Dillinja, Plastician, Kastle, Mimosa, DJ NuMark, the Glitch Mob & An-Ten-Nae (just to name a few) and has appeared at numerous music festivals including BC's Shambhala, Bass Coast, Diversity, & Loki Festivals, WEMF & Harvest Festival in Ontario, and the Dragon Festival in Granada, Spain. He currently curates a Sunday night weekly at The Keefer Bar in Vancouver, and was also running an all-vinyl reggae & dancehall weekly, Wax Wednesdays, up until the Waldorf Hotel's unfortunate closure.


A fixture in Victoria's bass community, Outsider (a.k.a Jon Camilleri) is a classic example of an outsider; a person not within an enclosure or boundary. Sidestepping these boundaries whilst pushing a forward-thinking vibe, Outsider has fast become known as one of Western Canada's most versatile artists, be it through his sounds or visual arts.

Cutting his teeth in Toronto's music scene and eventually making his way to the west coast, Outsider is closely aligned with both Whitebird and sub|division; two of Victoria's premier bass crews. Representing two different styles in two different affiliations, Outsider brings it all together in one unified underground dancefloor. His impressive resume sports a ridiculous amount of top notches; having been featured alongside DnB figure heads like Andy C, DBridge, Calx and Teebee, Noisia, and High Contrast among others. As a result, it's not surprising that Outsider was nominated and awarded as the best DnB DJ in the Victoria Nightlife Awards in 2012.

Besides rubbing shoulders with some of the best in DnB, he's also flexed his versatility as a DJ whilst sharing stages with artists like Datsik, Dub Fx, Distance, Rusko, and Zeds Dead. Not limiting himself to just club shows, festival appearances have included BassCoast, Soundwave, Rifflandia, Tall Tree as well as Victoria Electronic Music Festival (VEMF). Highlights have included providing closing sets for Dieselboy, Dirtyphonics (live) and TC at Soundwave Music Festival in 2009 and 2010 respectively.

In addition to being known as Outsider, he collaborates with S.U.B as the duo Dead Air which hones in on his minimal, deep and dark production. And as if his platter of production and DJing talents wasn't enough, Outsider is often the mastermind behind much of the graphic design work seen in the west coast bass scenes as Outsider-Inside Graphics.

This accomplished artist is adept at any art form he delves into. As a designer he explores some of the deepest spaces of consciousness in his designs. As a DJ, he's often known to dig through his creates of vinyl to pull out some of the best old school riddems to rinse out.

By any means, Outsider's reputation for developing sophisticated, danceable sets while appealing to the partiers and heads is widely known. The goal; Outsider's vision, your musical experience. Dark, atmospheric and powerful, passion driven by this vision will put you inside the mind of an Outsider.

He's the anti-thesis to anxiety and a new addition to Victoria's Bass music community... though Dustin Pronoia is anything but new to Bass music. When he's not crushing dance floors from Great White North to the West Coast, he's commonly found warping minds behind festival lighting consoles, such as Shambhala's "THE VILLAGE STAGE". He's an artistic bass beast, the man knows how to attack a junglist dance floor with samurai technique and juggernaut force; he's like a wrecking ball that can butter your breakfast toast on the back-swing, while destroying your town on the forward follow through. Keep an eye and an ear out for this guy, he's here to stay. 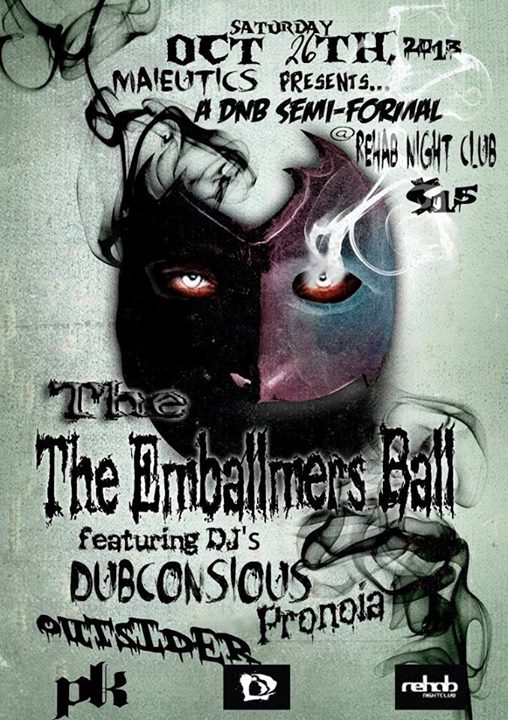