Two years can go by in the blink of an eye, or can stretch into a prolonged series of cross-country tours, weddings, funerals, rehearsals, odd jobs and getting your drivers license. Just ask Aidan Knight, the 25 year old songwriter and namesake of the Victoria-based band who unveil their second album Small Reveal on October 23rd

The roots of Small Reveal began in early 2012, in a similar rustic surrounding to that of their critically acclaimed debut album “Versicolour”: A cabin without running water on in rural British Columbia. Armed with hundreds of pounds of recording equipment; Olivier Clements, Julia Wakal, David Barry, Colin Nealis and Knight (via many wheelbarrows) set up in a gorgeous forest location with a cast iron stove and nearby swimming hole. After a week tucked away from society, armed with 15 brand new song ideas, they loaded the mountain of preamps and compressors back onto the ferry, returned home to Victoria, and spent the next 5 months quietly reworking the music.

Finally, in May of 2012, the band, joined up with producer and engineer Jonathan Anderson who was at the helm of Versicolour. Using the natural reverberant sounds of hanging guitars in a empty music store and the echoing distance of hallways in family homes, Knight and his collaborators created the swirling cinematics of Small Reveal in a whirlwind 10 days in 10 different recording spaces. The comraderie and the contributions of the band were integral to the process, Aidan explains; “Everything from horn arrangements to drum fills, they're things that I could never make up on my own. They're impossible; Only happening because of those 5 people in that certain space. I think the most powerful ideas are the ones that we never could have expected. As someone who's worked primarily on his own up until this point, I'm so glad that my best friends are the ones I can share and learn from now”.

Small Reveal presents the themes of inward thought and creativity, escapism, longing for success, and belonging. The result is an exciting yet dreamy, lushly-arranged record that swells and ebbs around the captivating focal point of Aidan’s voice. “The first time I was able to listen to the songs roughly put together…discovering what we had all made together. We had created something personal but omniscient, something ragged but polished, something that was reflective of what it means to spend a year crafting something that isn't revealed until the weeks. Unhurried. This is an album of music about creating music, the escapism in it and the uncomfortably honesty that hopefully shows itself.”

Justin Rutledge - Out of The Woods: http://www.youtube.com/watch?v=1UaKHW2so2c

grab bag! from Victoria BC
Available for Shows/Gigs 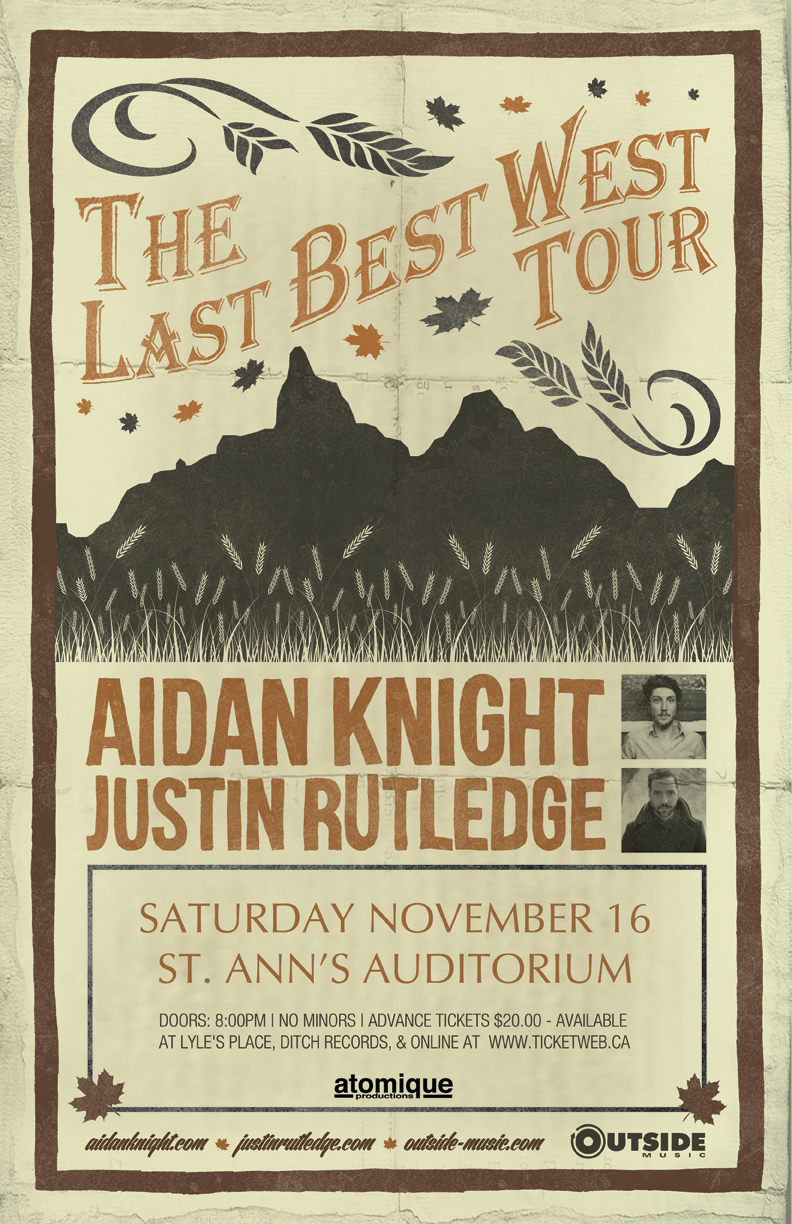