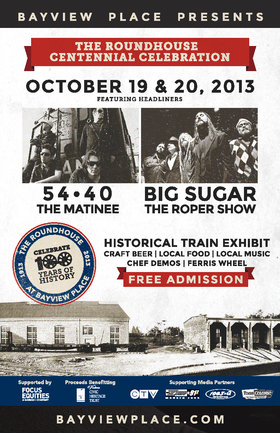 Music: Country / Bluegrass / Rockabilly, Folk / Celtic / Latin / World, Pop / Rock / Indie
On October 19th and 20th Bayview Place is presenting a celebration of 100 years of locomotion history at the historic Roundhouse site in Victoria. The Bayview Place Roundhouse Centennial is a free event welcoming the public to celebrate the history of the old rail yard. Running from noon to 10pm on Saturday the 19th and noon to 6:30pm on Sunday the 20th, the celebration will feature live music, craft beer and wine, local food, as well an interactive train exhibit and Ferris wheel for the whole family.

other sites:
54-40 is one of the most important popular music groups to emerge from the Canadian cultural landscape. Celebrating their thirty-year anniversary – a remarkable achievement in itself - the band has an unbelievable catalogue of hit songs, including "Baby Ran", "I Go Blind" and "Ocean Pearl". Lead by chief songwriter Neil Osborne, 54-40 have carved... more info

other sites: myspace
Shoot out the lights, and stone the roses—there’s some strong autobiography going on between the lines of The Matinée’s debut full-length album, We Swore We’d See the Sunrise. Taking its title from a line in “L’Absinthe”— the true story of a night of madness and delirium experienced while on tour in Quebec told between bouts of spa... more info
Articles: Marble Rye CD release party Friday May 8th

﻿ZERBIN is a Canadian band comprised of multi-instrumentalists Jason Zerbin, Peter Mol, Nick West, and joined live by Derek Gust and a family of musical magicians. Started in 2009, they quickly evolved from a solo project into a diverse musical collective creating the organic and often symphonic indie-rock sound that marks Zerbin. Think modern r... more info

other sites:
Formed in the spring of 2008, Quoia {Kwoi - a} is a collective of musicians currently residing on Vancouver Island, British Columbia. Quoia is a band known for their high-energy liveshow and uplifting grooves. Their music is a perfect blend of originality and accessibility, and the lyrics are clear, considered and meaningful. They perform a dynamic... more info
Submit info on this show to our admins