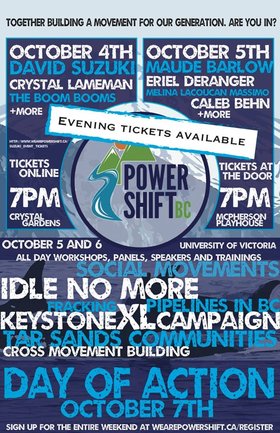 Hundreds of us will come together to continue to build a movement to take on pipelines, tankers, tar sands, fracking and the plan to transform BC into a carbon corridor.

We're throwing a party at the Crystal Gardens and will hear from David Suzuki, Crystal Lameman, Neelam Khare, Satsi Naziel with awesome musical performances from Ta'Kaiya Blaney & The Boom Booms.

Find out more about PowerShift BC at http://www.wearepowershift.ca

"Some of the tightest, smoothest, sexiest soul and funk produced in the city right now comes courtesy of six guys who all grew up within a few blocks of each other on Vancouver’s East Side." -The Georgia Straight The Boom Booms are an Indie Soul band from Vancouver, BC. The group consists of brothers Aaron Ross (lead vocals) and Sean Ross (k... more info
Submit info on this show to our admins