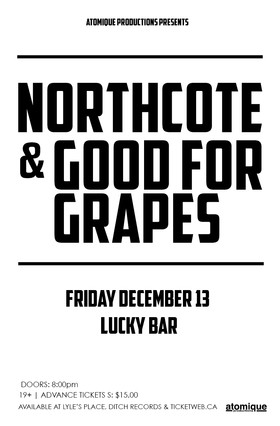 Matt Goud (aka Northcote) may take you by surprise when he steps up to the mic. Though the soft-spoken Goud is known by friends and family as a gentle giant, he infuses his original songs with a uniquely powerful and confident voice.

Northcote is set to return to centre stage in 2013 with a new self-titled album due May 7th via Black Box Recordings (Canada). Produced by Colin Stewart (Black Mountain, Cave Singers, Dan Mangan) at The Hive in Vancouver, the album is Northcote’s most forthcoming and confident album to date, reflecting this young songwriter’s increasing maturity and experience. Breaking the stereotype of the reserved and solemn cafe singer/songwriter, the album entices both the performers and the listeners to come out of their shell.

Good For Grapes formed in September of 2010, after a group of friends took a trip to Victoria, BC for some modest busking. Since the moment they stepped onto the ferry, they were an attraction. Drawing unexpected crowds, naturally this young and aspiring band took form; an original and talented five piece group, with an array of harmonizing voices and instruments. Hailing from Vancouver, British Columbia, this folk / alternative act has been gaining momentum ever since they stepped into the music scene. Their live stage performance in this time has evolved into an incredibly active, folk stomping, and inviting energy; always resulting in an extremely enthusiastic and involved audience. Beginning by supporting charities and foundations, their unique folk sound has been accepted into a large variety of venues. Through this, they have gained a loyal fan base which grows at every turn.