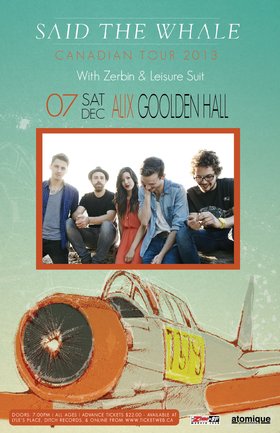 Atomique Productions and The Zone @ 91-3, Modern Rock in Victoria Present

Vancouver's Said The Whale has been on a steady upward trajectory for the past six years, as relentless touring and a prolific string of releases have led to successes including a JUNO Award in 2011 for New Group of the Year and nationally charting singles. In 2013, the tireless five-piece — which includes dual songwriters Tyler Bancroft and Ben Worcester, drummer Spencer Schoening, keyboardist Jaycelyn Brown and bassist Nathan Shaw — will continue to break down doors by releasing its most adventurous and hook-filled batch of songs yet.

The band formed in early 2007 and, following some early EPs, released the debut-full length Howe Sounds/Taking Abalonia in 2008. Said The Whale began to amass a grassroots following through frequent tours, and they scored a string of Canadian radio successes with the albums Islands Disappear (2009) and Little Mountain (2012). These albums earned attention from media outlets like Spin, BBC 6 Music, and Consequence of Sound, and the band was profiled in the nationally televised CBC documentary Winning America. Said The Whale has been nominated for two more JUNO Awards in 2013 for Alternative Album of the Year and Recording Package of the Year (alongside art director Andy Dixon) for Little Mountain.

In keeping with this inexhaustible work ethic, the band is releasing another new collection of songs in the form of the four-song I Love You EP, due out June 18, 2013, on Hidden Pony Records. Once again teaming with longtime studio collaborator Tom Dobrzanski (We Are the City, the Zolas) at his Monarch Studios, the musicians pushed their musical limits and honed their love of fast, punchy pop-rock.

"In the past I've felt pressure to write 'radio' songs, or 'cool' songs or whatever, but this time I went into the writing process with mindset of 'Fuck everything, I'm just going to write what makes me happy,'" says Tyler Bancroft, explaining that the songs were written with a clean slate and no expectations. Ironically, what resulted were some of Said the Whale's catchiest, most accessible songs yet. The singer observes, "It turns out I just like pop music."

This affection for melody shines on I Love You's title track which is led by a surge of post-punk guitars and careens between spiky choruses and a sunny, sock hop-inspired bridge. Elsewhere, the Worcester-sung "Barbara-Ann" is a buoyant blend of heartfelt romance and '60s-style vocal harmonies, while "Mother" is a synth-heavy new wave banger. These upbeat songs were mixed by Canadian studio guru Gus Van Go (Hollerado, the Stills).

"I spend so much time chipping away at my thoughts, trying to get to the core, and right now I'm finding it easy," Worcester says. "I've never felt more creative." He adds that the lovestruck mood of "Barabara-Ann" was inspired by a couple who own a hammock store in Vancouver. "It's a proposition to someone special, suggesting that we too can live together like this this beautiful pair of chilled out lifers," he reveals.

The EP offers a taste of Said The Whale's fourth album, due out this fall. These latest sessions found Bancroft taking on the role of co-producer, and he guided each song in bold new directions without adherence to genre. "Rather than record in one big session, we used the 'hip-hop method' of doing two or three songs at a time," he reflects. "This let us focus all of our energy on each song without getting overwhelmed."

The new material was penned in a surge of creativity that found Bancroft and Worcester letting their guard down and following their instincts. "My songs on this album are the most vulnerable songs I've ever written," notes Bancroft. "Lyrically it's the most honest I've ever been."

I Love You EP is the sound of a band already on the top of its game breaking free from all expectations and boldly reinventing its identity. And with a new full-length close behind, expect to see more new sides to Said The Whale soon.

Said The Whale - "I Love You" (official video): http://youtu.be/3nIzMeDc9vk

﻿ZERBIN is a Canadian band comprised of multi-instrumentalists Jason Zerbin, Peter Mol, Nick West, and joined live by Derek Gust and a family of musical magicians. Started in 2009, they quickly evolved from a solo project into a diverse musical collective creating the organic and often symphonic indie-rock sound that marks Zerbin. Think modern r... more info
Submit info on this show to our admins