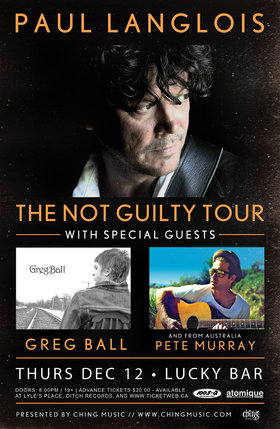 Atomique Productions and 100.3 The Q! Present

- Paul Langlois (of The Tragically Hip) -

This record is a surprise to me.

I didn't think I was making an album until it was almost finished.

In Feb 2010, I booked our studio (The Bathouse), and our engineer, Aaron Holmberg, for a few days, with the intention of experimenting a little.

I started with a couple of songs, Shattered Down and If I Were You, that I'd been tinkering with in my basement. For those 2 tunes, I'd already recorded the guitar and bass at home over a drum machine, and I wanted to see if I could play real drums over all of it, ideally replacing the electronic drums.

Aaron looped the song for me, (so it would start again once it reached the end), and pushed the record button. This allowed me to go over the previous take each time, giving me a few runs at practicing a drum part. When I (finally) played a take that I thought was close to right, I'd keep it.

At the time, If I'd have thought that I was making an album, I'd have phoned up our drummer, Johnny, to ask him if he would help me out. I also might have looked at putting a band together to record the songs. The problem with all that was that i didn't really have finished songs, and I felt like I was just privately experimenting - laying this stuff down so I'd have it for future reference.

And I liked the whole process enough to keep going.

For the most of the rest of the songs on the album, I started with a guitar part, then put the bass and drums over it, and then I sang it.

There were 3 songs, (Cards, Confidences, and Things I Should've Said) where I played the acoustic guitar and sang them first, and then added the bass and drums after that.

I came out of that 1st session with 5 songs. I went in for 4 days in May and recorded a few more songs, using the same sorts of methods I'd used the 1st time. I then did one last 2-day session in September.

By the time I went in for those last couple of days of recording, I'd come to realize that I was actually trying to make a record, not just recording songs.