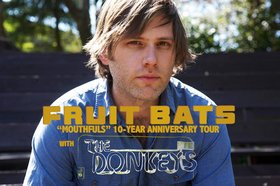 Sometimes a story can take a long time to tell. Eric D. Johnson, who has recorded and performed as the Fruit Bats for a decade now, had a story like that, a chance encounter that had rattled around his head for years. He’s tried to write it as a short story, a play, a movie…yet until now couldn’t get it down just right. Finally he decided to make a song out of it, and the result is “Tony the Tripper.” It’s the song at the heart of his fifth album, Tripper, setting the tone for a bittersweet meditation on hitting the road, leaving the familiar behind and reinventing yourself.

The story goes like this. Just after turning 20, Johnson boarded a train from Chicago to see his sister in Olympia, Washington. A grizzled vagabond—Tony—took the seat next to him for the ride to Fargo, North Dakota. Over the next 12 hours the two developed a strange relationship, the cantankerous oldster alternately bullying and befriending Johnson. A decade or so later, Johnson is still bemused by the encounter, wondering what he could have learned from this broken, frightening, but fascinating character. The song “Tony the Tripper” imagines the two of them heading out on a road trip, the idealist and the outlaw cutting a swath across America.

That trip never happened, in part because Johnson embarked on a career in music that has, to date, included ten years with the Fruit Bats, sideman duties for bands including Califone, Vetiver and The Shins, and more recently, soundtrack work for films like Ceremony and Our Idiot Brother. Yet as Johnson approached the ten-year anniversary of Echolocation, the Fruit Bats’ debut, he began to think, more and more, about the appeal of changing scenery. His own process shifted slightly to focus more on story-based songs, and following his collaborations with film-makers, he began experimenting with more abstract, less folk-based sounds. Johnson turned away from the strummy, breezy, guitar-based sound that so many people labeled “sunny” and began to work more with synthesizers and keyboards.

As a result, the theme of escape, of farewell, of turning one’s back on the comfortable runs all through Tripper. The shimmering, melancholy “So Long,” tells of a young woman constrained by a suburban life, the tune’s simple longing framed by the harp-like flourishes of a vintage Chamberlin keyboard. “She should dance if she wants to dance,” murmurs Johnson in his high tenor against a wash of synthesizers and a luminous twang of guitars. You get the sense that, finally, the girl does get her turn to shine. “Tangie and Ray” tackles a darker subject that has long fascinated Johnson, an Into the Wild-esque scenario where going back to the land turns deadly. Johnson says that the idea for the song came to him after a solo show in Anchorage, Alaska, when driving alone and not even that far from town, he saw how easily the wilderness could swallow a person up.

There are other types of farewells here, too. “Wild Honey,” the next to last song, is a tribute to the songwriter Diane Izzo, who succumbed to brain cancer the day that Johnson began recording Tripper. The two had met over a decade before in Chicago’s late 1990s music scene, where Izzo had a brief triumph with her debut album, One. Johnson had contributed to some of her later recordings, and they remained close and continued to talk about collaborating even after she moved to New Mexico. Johnson says that though he never intended to include a cover on Tripper, the song seemed to fit into his album’s spectral, melancholy vibe. “I’ve always loved that song. It has a really spiritual, very Buddhist undercurrent to it,” he adds. “It seemed like one of the best ways to honor her.”
Johnson recorded Tripper at WACS Studio in Los Angeles with Thom Monahan, best known as producer for the last four Vetiver albums, Devendra Banhart’s Cripple Crow, and the Pernice Brothers. Monahan combines a deep knowledge of sonics and a Zen-like approach, says Johnson. “He would say, ’I’m going to put a reverb on your vocals that you can’t even hear, but it will sound better,’” he recalls. His expertise in synthesizers was also critical to this keyboard-heavy album. For the first week, Johnson brought in a full band—Sam Wagster, Ron Lewis and Graeme Gibson—to capture some of the live excitement of the previous Fruit Bats album, 2009’s The Ruminant Band. However, after working alone on soundtracks for an extended period, Johnson knew that he wanted Tripper to be more of a solitary pursuit than his previous album. For the remaining four weeks, he worked with Monahan to deepen and refine the sound.

Yet perhaps the most radical thing about the album is not its haunting production, but the way it allows narratives to shape its songs. Johnson says that, though he began experimenting with story songs on The Ruminant Band, he has only recently made them his focus. He says that good songwriting doesn’t have to be baroque or overly literate or complicated to make an impact, though that may make it easier to recognize. Johnson himself prefers songwriters like Ray Davies, Paul Simon and even Tom Petty, whose verbal accomplishments may be overlooked because they are embedded in such catchy, tuneful melodies. “I think maybe I like those pop star songwriters the best,” he says.

Over the course of more than a decade, Fruit Bats have looked for ways to file down the cynical edges of modern life. Using bright melodies, defiant major-key chord structures, and natural imagery mixed with the occasional blazing insight or tender observation, Fruit Bats have never shied away from darkness, but have also resolutely refused to shy ... more info
Submit info on this show to our admins