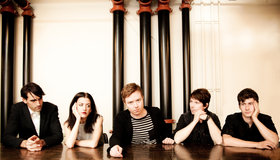 Music: Pop / Rock / Indie
FAST ROMANTICS
http://www.fastromantics.com/
While Fast Romantics’ earlier work prompted comparisons to Elvis Costello and Blur, Afterlife Bluescarves a bit of a different path right through the great cities of American music. From New Jersey to Detroit, and then cutting down through the heartland, they have somehow managed to combine all of these sounds without selling their distinctly Canadian souls.

MISE EN SCENE
http://www.miseenscenemusic.com/
The music is clamorous and captivating, with hints of everything from ‘60s pop and alt-country to early punk and garage rock – organic and unadulterated by studio trickery. From Johnson’s powerful leads and subtle harmonies through to Dunlop’s manic vigor, Mise en Scene don’t pull any punches; in fact, they’re throwing haymakers.

HANDSOME DISTRACTION
http://www.handsomedistraction.com/
Handsome Distraction has taken a steady approach toward breaking into the rock music scene since its formation in 2009. Its refreshing, upbeat rock sound and authentic and energetic stage performance sets them aside from the surplus of others trying to make it big.

Devin Perfect sings with passion and power while blazing his two-step around the stage, Joey Mono's leads stay with you like a well placed catch phrase, while Chris Weaver dances his fingers over the bass’ fretboard, all supported by Kyle White’s robust nerve pulsing rhythms. Handsome Distraction’s talented quartet successfully combines the eclectic influences of bands like Weezer, Foo Fighters, Kings of Leon, and the Pixies.

other sites: handsomedistraction | myspace
Handsome Distraction, a four-piece rock band from Victoria (BC), has taken a steady approach toward breaking into the rock music scene since the formation of the band in 2009. Doing what so many bands attempt, Handsome Distraction have an original and refreshing sound with an authentic and energetic stage performance to coincide. Devin Perfect s... more info
Audio: Intervention, Animal, Knee Deep
Submit info on this show to our admins