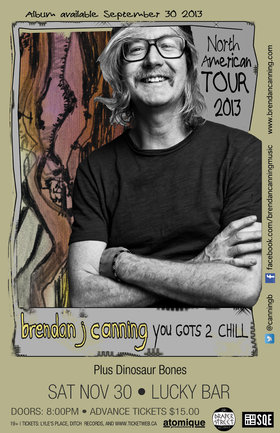 
Broken Social Scene’s Brendan Canning will release his second solo album, You Gots 2 Chill, on October 1st, 2013 via SQE and his own Draper Street Records.

Even with Broken Social Scene on indefinite hiatus, it’s been an especially busy year for Brendan Canning: he recently revived his long-dormant, pre-BSS indie-pop project Cookie Duster; he composed the soundtrack to Paul Schrader’s upcoming Lindsay Lohan spectacle, The Canyons (written by Bret Easton Ellis); and he’s currently working on an ambitious interactive video-game/film project based on a premise that involves director David Cronenberg selling his intellectual property to a biotech lab.

Amidst all this, he found time to write and record You Gots 2 Chill, providing the clearest, most personal portrait to date of an artist who’s spent much of his twodecade career making other people sound better. Back in the ’60s, some acousticguitar slinging boho from Minnesota extolled the virtues of bringing it all back home—with You Gots 2 Chill, Brendan Canning updates that maxim to 21st-century
standards.

If BSS was famously born in co-founder Kevin Drew’s basement, Canning’s solo effort, You Gots 2 Chill, was birthed in Canning’s own home on Toronto’s Draper Street, a street that Canning has lived on since the mid-90’s. The homespun vibes are intentional; You Gots 2 Chill is a reflection of Canning’s private world, an album that puts you right there in the living room with him, inviting you to zone out on the floor in a blissful half-conscious state, and forget about the time of day and where you need to be. The album’s title doubles as a mission statement: You Gots 2 Chill. It’s a
directive that’s easy to dismiss as hippie-jive hokum… that is, until you realize you’ve rushed off to work without eating breakfast again, you forgot to call mom on her birthday, and your most meaningful personal relationship is with your smartphone.

Rest assured, however, that You Gots 2 Chill is not some hacky-sackin’ soundtrack, nor is it FOLK! in all caps. Despite its deliberately hushed tones, this music is, in its own unassuming way, just as psychedelic, richly textured, and far-reaching as Broken Social Scene’s most out-there epics. The opening instrumental fanfare, “Post Fahey,” is the first indication of its exploratory intent, with a titular and stylistic nod to the improvised acoustic-guitar odysseys of freak-folk pioneer John Fahey. From there, You Gots 2 Chill forges a balance of softly whispered melodies and heady atmosphere that belongs to a storied lineage of understated experimentalism, from the foggy pastorales of Nick Drake (see: the river-wading drift of “Never Go to the Races”) andmisty-mountain rusticity of Led Zeppelin III (as heard in the Page-turning string bends of “Plugged In”) to the modernist soft-rock of The Sea and Cake (check the bossa nova’ed beauty “However Long”) and the hallucinogenic folk phantasmagoria of Animal Collective’s Sung Tongs (conjured in the hypnotic pulse of “Makes You Motor”).

Though it’s technically the second release to bear Brendan’s name on the cover, You Gots 2 Chill feels more like a true solo effort than the stylistically varied, guest-list stacked Something For All of Us. Not only was it recorded without the assistance of Broken Social Scene (or its umbrella organization, Arts & Crafts), You Gots 2 Chill bears Brendan’s literal fingerprints: he drew the cover art himself, and has launched his own independent label to release it (in partnership with L.A.-based music company SQE). And it doesn’t get much more DIY than recording tracks onto your voicemail: The comforting, dust-covered interludes “Long Live Land Lines” and “Once a Lighthouse” will make you glad he pressed 9 to save those messages—for one, the latter track serves as the foundation for the splendorous album standout “Lighthouse Returns.”

All in all, You Gots 2 Chill is another in a long list of incredible projects that bares the mark of Canning’s brilliant, creative hand. It is an album for hazy summer days, lazy late Sunday afternoons, or when you just need a break from it all. Chill, indeed.


Dinosaur Bones - Nothing Left Between the Lines (Official): http://youtu.be/HRCSZzS0ugo

In 2008, songwriter Ben Fox packed up his instruments and left Montreal, where he’d spent several years studying political science and English lit at Concordia University. After resettling in Toronto, he started piecing together a lineup of likeminded musicians to play the material he’d composed between classes. Joel Clifton, Branko Scekic, Dav... more info
Submit info on this show to our admins