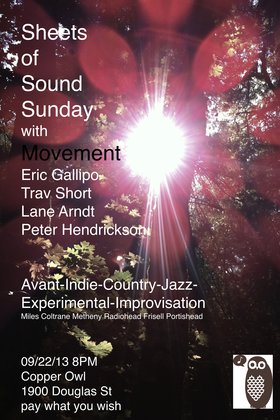 Event Archive - Sheets of Sound Sunday is BACK!!, an experience in Jazz and Improvised music. with: The Movement

Music: Jazz / Blues
featuring: from Edmonton, Peter Hendrickson, one of the most playfully agile drummers within flying distance. Peter will be making his Victoria debut in an improv/jazz context with Movement, thereby reuniting him with two other Edmonton expatriates: Travis Short on Bass, and Lane Arndt on guitar.

Acoustic Bassist and set-up specialist Travis Short has been playing to great and awed crowds with Sara Marreiros for the past couple years and has the honour of being one of the driving forces behind Victoria's own Talking Heads tribute band.

Lane Arndt has been playing around the Victoria area only occasionally as a jazz instrumentalist, having left behind a busy schedule of performing in Edmonton for an island relocation 4 years ago. Playing, recording and touring with Kathryn Calder and rocking pubs with Run For Cover have kept him on stage but it's the improv/jazz world where the channel really opens up; moving freely from bucolic folk melodies to aggressive atonality, an openness to creative freedom proves to be the epicentre of pure musical expression.

Completing the quartet is trumpeter Alfons Fear, a local fixture in many arenas and idioms where great music and musicians are found. Alfons has a burn like a fire you don't feel till it's too late and brings a texture to the evening and the aesthetic that is not heard enough around these parts!

Sheets of Sound Sunday is an evening for the music lover who already knows how great jazz is and also for the uninitiated who suspect it might be as cool as it really is! The name comes from John Coltrane's personal approach to improvisation wherein he would run up and down on the horn in huge streaming clusters of notes attempting for his part, to create the sound of sustained harmony, a technique all but impossible on a single note instrument like the Saxophone! In much the same way, guitarist Lane Arndt is pushed by the limitations of the guitar to push conceptual boundaries and create a liquid and sustained but dynamically shifting texture.

Before, in-between and after the two sets of live music with Movement, members of the band will be curating a listening party of some of the best jazz ever recorded! If you've ever wanted to be in a great venue listening to A Love Supreme, some early '60s Miles Davis and modern masters like William Parker, Nels Cline and Drew Gress while you drink your local brew or highball this is the event for you!

$8 suggested donation. Envelopes will be placed on all the tables where you can discreetly donate $$ to the bands.

other sites: | spoti
The Movement has been winning the hearts and minds of alternative-reggae fans since their inception in Columbia, SC in 2003. Drawing inspiration from Sublime, 311, Slightly Stoopid and John Brown’s Body, they’ve come to be known as musical shapeshifters with a foundation of heavy drum and bass. Today the band consists of founding member, lead v... more info
Submit info on this show to our admins