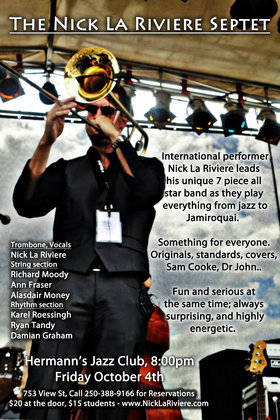 Music: Funk / R&B, Jazz / Blues
International performer Nick La Riviere has performed all over the world in places like Germany, England, Ireland, Luxembourg, Austria, Switzerland, the USA, and more. He plays regularly with Juno winning band, The Paperboys, as well as many other projects. He's always on the move alternating between performing on the island and elsewhere. On October 4th, Nick's septet takes the stage at Hermann's Jazz Club.. but it's not just jazz. Sure there's a jazz element to the show, but there's a fun funky pop element as well. The show has everything from jazz to Jamiroquai. Originals, standards, covers, the works. Nick sings and plays trombone, and is backed up by some of the finest musicians Victoria has to offer - Richard Moody, violin; Ann Fraser, violin; Alasdair Money, cello; Karel Roessingh, piano; Ryan Tandy, bass; Damian Graham, drums. There's always some great energy and creativity. This is truly a show that has something for everyone, whether you're a serious music listener or just out for fun evening.

Trombonist Nick La Riviere plays music from his debut album, Too Much To Do. This unique album features an excellent rhythm section, as well as a three piece string section (two violins, cello) and has been called exuberant, multi-faceted, humorous,outgoing, and just fun. The music is a mix of original compositions and unique arrangements. This wil... more info
Submit info on this show to our admins