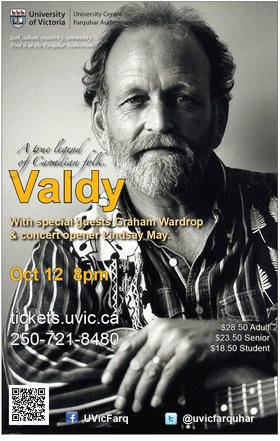 Music: Folk / Celtic / Latin / World
Valdy has been part of the fabric of Canadian pop and folk music for over 34 years. A man with a thousand friends, from Newfoundland to Vancouver Island to Texas to New Zealand, he's a singer, guitarist and songwriter who catches the small but telling moments that make up life.
Remembered for Play Me a Rock and Roll Song, his bitter-sweet memory of finding himself, a relaxed and amiable story-teller, facing a rambunctious audience at the Aldergrove Rock Festival circa 1968, Valdy has sold almost half a million copies of his 13 albums, has two Juno Awards (Folk Singer of the Year and Folk Entertainer of the Year), a total of seven Juno nominations and four Gold albums to his credit.
https://tickets.uvic.ca/TheatreManager/1/tmEvent/tmEvent1992.html