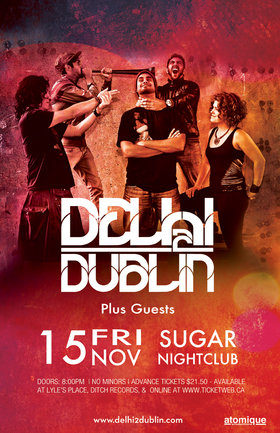 Delhi 2 Dublin has played top festivals in Canada, the UK and the U.S. and, in 2011, expanded its horizons to include performances in the Pacific Rim and Europe. A new album and new international touring opportunities all signal that originality and evolution are all part of the Delhi 2 Dublin experience. Described by one magazine as the “United Nations of rock ‘n’ roll”, they have become one of Canada’s most buzzed-about bands. This year will only see them enhancing that reputation. After all…where else are you going to see a kick-ass fiddle player rocking out with a kilt-wearing Korean flanked by two bouncing Bhangra percussionists and a vocalist who looks like he would be at home in a Bollywood music video?

Turn Up The Stereo is released August 28th 2012 in Canada and February 19th 2013 internationally.

Fight In The Fields

other sites: myspace
Fight in the Fields is a six piece live hip hop band from Victoria B.C. They have perfected a formula of keyboards, drums, samples, turntables and skillful MCs. Constructing a solid hip hop experience with what can only be described as V.I style. Performing together in various projects since 2002, they have been major contributors to the local hip ... more info
Submit info on this show to our admins