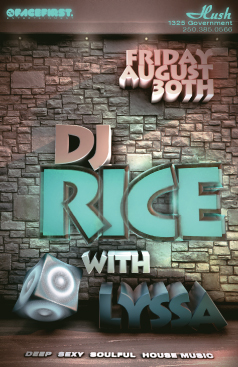 Face First Entertainment is thrilled to bring it back!

A limited number of advanced tickets are available at Hush Nightclub for just $10! (only 10 left as of Thursday August 29th) Ask for Jeremy!

Born and raised in Calgary, a pioneer of the electronic music scene, Mark Quan AKA DJ Rice, has been spinning sweet sounds since the late 80’s.The legendary “DJ Rice’s Sunday Skool” is currently held every Sunday night at The HiFi Club in Calgary. With 806 shows and counting it is one of the longest running club nights in the world.

“Sunday Skool” is where he spins his brand of deep soulful house music. He has also expressed many other genres of music over the years. With such a vast number of musical styles and experiences has come a large record album and music collection - over 10,000 records!

DJ Rice has also had residencies in a wide variety of Calgary and area Lounges and Nightclubs. Some places he has played at are The Republik, The Banke, The Empire, The Embassy, The Night Gallery Cabaret, The Ship & Anchor, Cherry Lounge, The Venue, Habitat, NoName Lounge, and The HiFi Club. He has played alongside many other notable DJ legends such as, Little Louis Vega, Marques Wyatt, Diz, Marshall Jefferson, DJ Heather, Roy Davis Jr, just to name a few.

http://soundcloud.com/lyssa
Lyssa is passionate about art, clothing & costume design, music, & dancing. Her first appearance as DJ "Lyssa" took place in 2005. Having spent 11 years in Mexico, and being fortunate enough to be exposed to Latin culture, she has a strong desire to explore her roots in her musical selections. Lyssa's style could be described as sexy, smooth, organic, & classy, depending on what what mood we catch her in, expect anything from deep rolling Chicago house to quirky & bouncy Latin house..

Lyssa has had the privilege of performing at summer festivals such as Shambhala Music Festival, Victoria Electronic Music Festival, Entheos Gathering, Bushwacked, Fozzyfest, Uprising, and Solaris. She made Victoria her home in spring 2007, and you can catch her performing regularly at some of the city's coolest lounges & underground hotspots like Hush, The Sunset Room, Temple, Cenote & The Mint.

A limited number of advanced tickets will be available for purchase at Hush Nightclub Saturday August 10th for just $10!! (See Jeremy Bittner)

This event brought to you by Face First Entertainment!