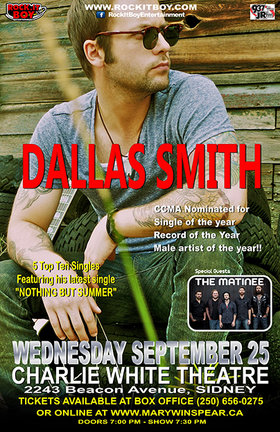 Music: Country / Bluegrass / Rockabilly
Dallas Smith, ten year veteran and front man of the successful Rock band Default, has stepped on over to the world of Country music. And what a successful step it has been! His debut album Jumped Right In immediately shot to the top of the Canadian Top 100 Neilsen Soundscan Chart, peaking at #19 and #4 on the Country Album Chart. An unprecedented five Top 10 singles, "Nothing but Summer", "What Kinda Love", "Jumped Right In", “Somebody Somewhere” and “If It Gets You Where You Wanna Go”, have emerged from his first country music project. Such meteoric success is no coincidence. Rather, it is the result of genius collaboration with acclaimed songwriter/producer Zac Maloy, Grammy nominated songwriter Rodney Clawson, Chris Tompkins and Joey Moi, Nashville’s biggest and brightest.

To Dallas, country music has always been about the “special combination of voice and song.” He says, “I’ve always chosen and written songs with challenging vocals that I love to sing.” That credo has landed dallas smith in the middle of the 2013 CCMA Awards. He will perform live at the awards show where he will also anticipate the outcome of his three nominations for Album of the Year, Male Artist of the Year and Single of the Year. This is sure to be a landmark concert for this shooting star.

other sites: amazon | | kt8merch
Dallas Smith knows country music like he knows success. He knows what it’s like to sell millions of records, because prior to his breakout country solo debut album Jumped Right In and its smash first single, “Somebody Somewhere,” and the new “If It Gets You Where You Wanna Go,” the Vancouver native furnished the pipes for the rock band... more info

other sites: myspace
Shoot out the lights, and stone the roses—there’s some strong autobiography going on between the lines of The Matinée’s debut full-length album, We Swore We’d See the Sunrise. Taking its title from a line in “L’Absinthe”— the true story of a night of madness and delirium experienced while on tour in Quebec told between bouts of spa... more info
Articles: Marble Rye CD release party Friday May 8th
Submit info on this show to our admins