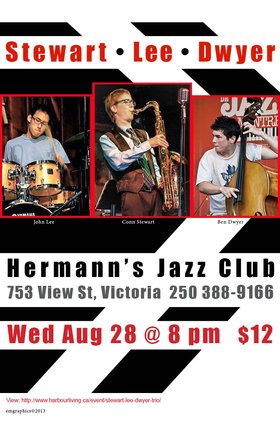 
John Lee (drums, keys, bass, guitar), of Nanaimo, recently appeared as the drummer with the Cyrus Chestnut sextet at Dizzy’s Club Coca Cola at the Lincoln Centre in New York. An outstanding young multi-instrumentalist, he has spent the past three years studying jazz performance at Berklee College of Music in Boston, Massachusetts, playing on the east coast, and has appeared with jazz luminaries such as Terrell Stafford, David Santoro, Greg Osby, Phil Dwyer, Ingrid Jensen, and Christine Jensen, among others, when not leading his own combos.


Ben Dwyer (bass, alto sax), originally from Qualicum, has played at the Montreal, Vancouver, and Victoria Jazz Festivals, and with a number of prominent jazz figures including Don Thompson, Seamus Blake, Ingrid Jensen, and Alan Jones, and periodically appears with renowned Canadian saxophonist Phil Dwyer, in addition to leading his own combos. He has spent the past two years in the jazz performance program at Schulich School of Music at McGill University, and currently plays out of Montreal where he is a highly sought after bassist.