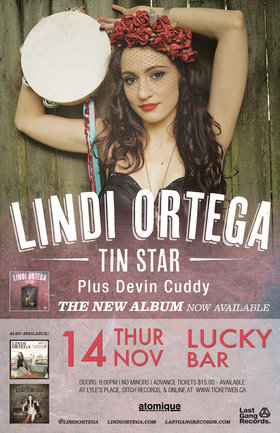 “The song Tin Star speaks to the plight of the struggling musician,” explains country songstress Lindi Ortega, sporting her signature red lips and red boots. “To those who are so driven by their passion that they soldier on, despite the odds being against them.”

Fortunately for Ortega, her star continues to rise, catching the attention of critics, fans and radio stations worldwide. Tin Star, the brand new album of the same name from the Toronto born, Nashville dwelling singer-songwriter, is incredibly close to Ortega’s heart and is influenced strongly by life in her adopted home of ‘music city’.

“It’s always my goal to raise the bar with each record I put out. I have witnessed so much talent living in Nashville that has inspired me to push myself even further,” says Ortega, “I like to work with different musicians and producers to change the feels of every release. I don’t want to risk making the same record over and over. Working with a new group brings a new spirit and new ideas to the music.”

Several songs on the album touch on the classics of country music. Loneliness, unrequited love, crumbling relationships and primal desire pepper Tin Star and give Ortega a chance to let her contemporary twist on traditional country shine through.

‘Hard As This’, one of the standout tracks from the album, speaks to difficult relationships, how they often seem to be more trouble than they’re worth and the feeling of giving all you have and it still not being enough. While ‘I Want You’ takes the dark undertones that Ortega’s music is known for and explores the dark side of desire and the need to be bad to get what you want.

“I have this drive to prove people wrong; people who thought I should give up or assumed I’d never get anywhere. I decided to name the album Tin Star to always remind me where I came from; to never forget my humble beginnings and years of hard work and struggle.”

Whether the stars she’s imagining are in the night sky or made of tin hanging on an old barn door, Ortega’s painting a picture of a career continually on the rise despite any obstacles that may come her way.

Armed with an inimitable, irresistible singing voice The Independent hails as “a truly magnificent instrument,” and a heart bursting with creative ambition, the Canadian songstress whom American Songwriter calls “the love child of Johnny Cash and Nancy Sinatra” decided to relocate to Music City from her native Toronto to birth her brand new... more info
Submit info on this show to our admins