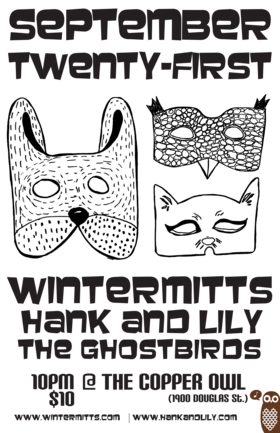 Music: Country / Bluegrass / Rockabilly, Electronic / DJ, Folk / Celtic / Latin / World, Pop / Rock / Indie
WINTERMITTS
http://www.wintermitts.com/
Wintermitts, a genre bending six-piece from the rain-soaked left hand corner of Canada, in a city called Vancouver. They sing in French and English. They rock out on trumpets and accordions. They waltz when they need to and they’re as absorbing (and comforting!) as you’d hope a winter mitten would be. Since 2005, they’ve been soothing souls in a way that Chicken Soup could only dream of. Watching them live is like peering into the playroom of six best friends, swapping instruments whenever they please and letting love drift like dandelion seeds.

Make no mistake, though - the ‘Mitts mean business. They’ve taken DIY to horticultural extremes, inserting tomato seeds into every sleeve of their 2008 album Heirloom. Since that time, they have lost some members and gained some new ones. They’ve done two successful cross-Canada tours and you best believe they have another in the works. They’ve shared stages with The Dø, Julie Doiron, You Say Party!, Hannah Georgas and Jon and Roy. In late 2011, they performed with the UBC Symphony Orchestra at the Chan Centre in Vancouver.


The Ghostbirds
http://theghostbirds.bandcamp.com/
The Ghostbirds perform as a folky duo or as a full rock band. West Coast Island rhythms and harmonies with a Van/Seattle edge. Some sonic cousins include The Swell Season, Fleetwood Mac and Arcade Fire. The single Love is a Con was nominated for the 2012 Song of the year at the VIMAs and won for music video of the year in 2013 http://youtu.be/XAKRhSRdgGk. The debut album is due for release this Fall!

other sites: youtu
Formed in June of 2009, The Ghostbirds are an original folk duo/band out of Victoria BC. Described as "wild fairy music" and "ancient celtic meets an apocalyptic future". The Ghostbirds delve into the mystic and take you with them on a journey through their eerie and soaring siren songs. Influences: Mother Mother, Bjork, Radiohead, Iron&Wine, Mo... more info
Submit info on this show to our admins