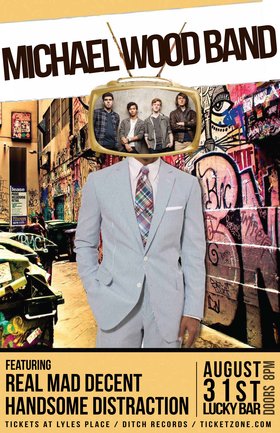 
While fans are immediately struck by the relevance of the evocative lyrics, they are ultimately won over by Michael Wood Band’s attention to all the elements that make for great music. The live show is pure energy, with animated guitar leads, melodic rhythms, and a seriously infectious groove. From Canada’s west coast, the four-piece features Michael Wood (vocals/guitar), Josh Weed (guitar/vocals), Jon Burgundy (bass/vocals), and Alex Campbell (drums/vocals). Dynamic guitar and driving rhythms power this refined alternative rock offering, providing a showcase for Michael Wood’s fresh youthful vocals and perceptive lyrics.

MWB’s first album “Occupy This” was released in May 2012. The band’s sound reflects multiple influences, and diverse topics, such as the Arab Spring (Should We Be Afraid), over commercialism (End of the World) and finding your own path (I Think I'll Just Go to Bed). “It's definitely got some political themes,” said Wood. “But we weren’t trying to communicate any specific message, just being conscious of what's going on in the world; being aware of our surroundings.” While often compared with artists such as Green Day, The Killers, and the Kings of Leon, “Occupy This” makes it clear that Michael Wood Band has a unique sound all its own.

The past year has been a busy one for MWB. Since releasing their first album “Occupy This”, the band has played everything from small charity shows to large festivals, including a performance at the Calgary Stampede and opening spots for Buckcherry, Platinum Blonde, Faber Drive and Prism “It’s really great to see people responding so positively to our music.” says Michael. “People hear the songs and see our video for the single “End of the World” and are really excited to have us out to play. It’s been really encouraging.“ One club owner raves “We had an incredible response from the patrons and staff which all had nothing but great things to say. We even had a few members of some other bands that play our venue and they were blown away by their ability and diversity.”
Response from industry experts has also been positive. Recently MWB was selected as a semi-finalist in the International Songwriting Competition from 20 thousand entries worldwide, nominated for two Vancouver Island Music Awards, and recognized as one of Victoria’s hottest bands of 2013 by Monday Magazine. Receiving radio play nationwide, MWB was voted New Artist of the Month on Ontario’s CKXS FM. Recorded at the Barn Recording Studio (Randy Bachman, Buffy Sainte-Marie) "Occupy This" continues to bring them new fans, proving that the MWB are as dedicated to writing and recording great songs as they are to playing an incredible live show.

With only 2 years experience under their collective belt, Real Mad Decent have already begun creating waves in Vancouver’s bustling music scene with their energetic brand of rock/funk – a sound with maturity beyond their young age of 20-21 years.

Recently named in the 2013 Vancouver Fox Seeds contest as one of the Top 20 entries, Real Mad Decent will showcase their abilities to music industry professionals this August in the hopes of taking the top prize.
Their first EP, simply coined – The Real Mad Decent EP – showcases their ability to craft catchy songs with a level of confidence and attitude that few artists can after only 12 months as a band. “Their gritty debit EP can sound refreshingly purist in a digital landscape” says Vivian Pencz of The Georgia Straight. If this EP is any indication, you can expect big things from the band through 2013. The EP is currently available for download on the iTunes store.

Handsome Distraction has taken a steady approach toward breaking into the rock music scene since its formation in 2009. Its refreshing, upbeat rock sound and authentic and energetic stage performance sets them aside from the surplus of others trying to make it big.

Devin Perfect sings with passion and power while blazing his two-step around the stage, Joey Mono's leads stay with you like a well placed catch phrase, while Chris Weaver dances his fingers over the bass’ fretboard, all supported by Kyle White’s robust nerve pulsing rhythms. Handsome Distraction’s talented quartet successfully combines the eclectic influences of bands like Weezer, Foo Fighters, Kings of Leon, and the Pixies.

Handsome Distraction have successfully recorded and released three EP’s over three years. Their latest EP, "A Mighty Roar," was released in May 2013. It was recorded at The Noise Floor Recording Studio with engineer Jordan Koop and mixed/mastered by Adam Sutherland at Infinity Studios. The band continues to earn their place among the best in Canadian rock music, as well as their ever-growing online presence and catching music, capturing the awe of their fans and attention of industry representatives.

The band had a very successful 2012. They released their second EP, “Fight or Flight,” which has received high acclaim. The band also went on a successful Canadian tour that August, catching the eye of fans, promoters and managers across the country.

So far, 2013 has had the band showcasing at Canadian Music Week in Toronto, a slot at the Telus World Ski & Snowboard Festival, the release of their new EP, "A Mighty Roar." Handsome Distraction will be embarking on a western Canadian tour this September, followed by a US tour this winter.

With tight arrangements, natural flare, and catching songs, this band has it all. Keep your eyes on these guys and your radios dialed in as Handsome Distraction makes their way through a city near you.

other sites:
“Michael Wood writes songs that are contemporary and surprising yet somehow familiar, like the listener is remembering them when they hear them for the first time. He’s an engaging performer too.” says producer/musician Shaun Verreault (Wide Mouth Mason). If you have been seeking something new amid the cluttered music scene, Michael Wood Band... more info

other sites: handsomedistraction | myspace
Handsome Distraction, a four-piece rock band from Victoria (BC), has taken a steady approach toward breaking into the rock music scene since the formation of the band in 2009. Doing what so many bands attempt, Handsome Distraction have an original and refreshing sound with an authentic and energetic stage performance to coincide. Devin Perfect s... more info
Audio: Intervention, Animal, Knee Deep
Submit info on this show to our admins