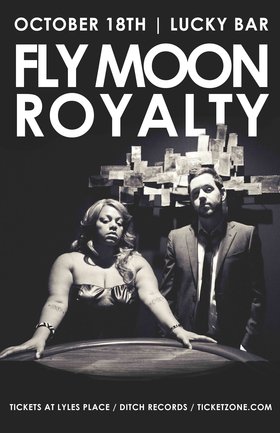 The combination that makes up Electro-Soul duo Fly Moon Royalty is Vocalist/ Fast Talker Adra Boo and DJ/Producer/Emcee Action Jackson. Adra, a Seattle native and sophisticated songstress, whose inspiration is drawn from everyday life, has been blazing trails in the theater and burlesque community, and is building her name as a one of a kind host for special events. Jackson, who re-located to Seattle from Grand Rapids, Michigan in 2009, is the musician’s musician in every sense of the phrase. He credits great artists such as Danny Elfman, DJ Premier and Stevie Wonder as some of his biggest influences and inspirations; he also continues to make his mark on the radar as a DJ in the Seattle area.
The duo formed in the winter of 2010 under the name Sugar Water Purple, but soon disbanded the moniker after discovering another group with the same name already existed, thus birthing Fly Moon Royalty. Their style remains soulful, but at the same time experiments with electronic textures, which makes up the backbone of their sound. Your ear is immediately keen to their influences drawn from the golden era of Hip Hop as well as a deep feel of 60’s influenced jazz and soul sounds, all of these are key elements that create the rebel dance music that is Fly Moon Royalty. Their sound touches upon familiarity, but it’s not approached in any traditional manner. Fly Moon Royalty has been compared to the Gossip, Janalle Monae and Gnarls Barkly.
After recording their self- titled debut project and releasing it independently in early 2011, Fly Moon Royalty caught the ear of DeVon Manier, President of Seattle based indie Hip Hop label Sportn’ Life Records. The two entities partnered and re-released the album as a joint effort.

Fly Moon Royalty is just getting started and if the response so far is any indication to the future, the group has a bright one.

Fly Moon Royalty is made up of two multitalented individuals: Action Jackson, DJ/Producer/Emcee out of Grand Rapids, Michigan. As one half of the hip hop duo, Sex Panther, he brings a definite feel of that old skool style... smooth melodies over dope beats. Still fresh on the Seattle radar, Action Jackson is one not to miss both as a performer and ... more info
Submit info on this show to our admins