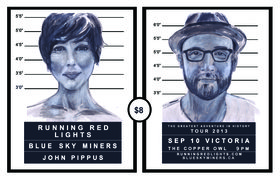 Music: Folk / Celtic / Latin / World, Pop / Rock / Indie
JOHN PIPPUS
http://www.johnpippus.com/
From sharing a stage with Jackson Browne to playing to small, but appreciative coffee house audiences, John has lived a life filled with music and well-earned stories. SoundProof Magazine has declared him, "…a folk/roots gem"; The Vancouver Province says he's: "…a refined tunesmith with serious pop hooks". Earshot Magazine's Shelley Gummeson says:"He has a gift for making us believe that he's been down road and around the block, and is still kickin' it."

RUNNING RED LIGHTS
http://runningredlights.com/
http://www.facebook.com/RunningRedLights
'Born into a space between the notes of Fleetwood Mac and the words of Sylvia Plath'. Running Red Lights is a high-spirited group of four with an inherent rarified energy and a memorable sound that raises the pop spirits of the past. Migrating from small towns all across Eastern Canada to the swelling city of Toronto, Kevin Howley, David Puzak, Jeff Carter and Scarlett Flynn cleverly weave insightful lyrics into beautifully crafted pop songs. The band has been compared to the harmonious sounds of Fleetwood Mac, Of Monsters and Men, Hey Ocean, Coldplay, Grizzly Bears and Said the Whale.

THE BLUE SKY MINERS http://www.facebook.com/Blueskyminers
B.C natives Jena Gogo and Jay Mitchell reunite with the landscape that inspired much of the material from their upcoming debut release, 'Shot In The Dark.' After four years in Toronto, and joining musical forces with Eric Duquette and Kevin Howley, they bring together the perfect touch of city edge to a folksy West Coast sound.

Selected by VANMUSIC.CA as one of "The Best 10 Indie Vancouver Bands " Playing out of Vancouver BC, this quartet offers solid entertainment. What do they play? Blues, rock, and urban-folk ballads, mostly original but some covers too. They can be rough and in your face on tunes like "I'm Mad", or playful and fun on the reggae-inspired "Sooner ... more info
Audio: Man Of Constant Sorrow

other sites:
'Born into a space between the notes of Fleetwood Mac and the words of Sylvia Plath'. Running Red Lights is a high-spirited group of four with an inherent energy that moves from physical to spiritual and from the immediate present to the transcendental past. Migrating from small towns all across Eastern Canada to the swelling city of Toronto, Kevin... more info
Audio: Mulberry Love
Submit info on this show to our admins