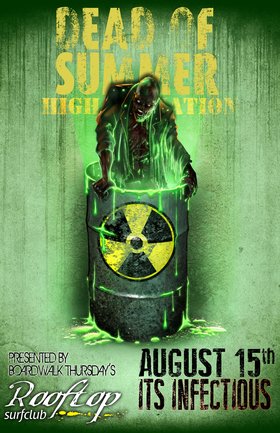 Event Archive - The Dead Of Summer ---Zombie Party!---: DJ Levi Hawke (will be Spinnin' for the Unlivin' )

Music:
A full-blown Zombie Party on The Roof of Victoria's famous Strathcona Hotel!

Radiation leaks have caused severe mutations and Party Zombies are multiplying by the minute. They have been quarantined to the Rooftop Surfclub by our own Zombie Outbreak Response Team.

We are attempting to cure the Un-Dead by exposing them to high levels of fun, wicked drinks for the dead and music with some spinnin' for the unlivin' by DJ Levi Hawk!

Get your make-up on and be a part of the Rocking Dead! A party unlike Victoria has ever seen!!!