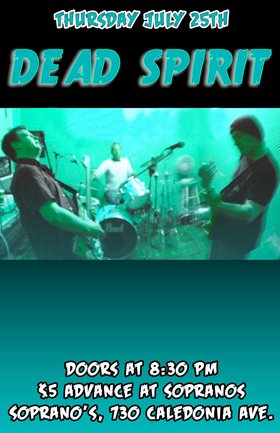 Music: Punk / Metal / Hardcore, Tribute / Cover
That's right, folks! Like a poorly-named ghost, DEAD SPIRIT is back once again - and this time we've been *practicing*!

For the past 6 months we've been working on a new set of approximately 90 songs. You may have seen us debut our new & improved BUTTHOLE SURFERS set at the penultimate Rat's Nest bash, and we've learned even more since then! You'll hear some of those, you'll hear some brand new songs, you'll hear all your old favorite classics (you know the ones), and a randomly generated slew of covers b...y artists such as NEIL YOUNG, NIRVANA, DINOSAUR JR, SONIC YOUTH, MISFITS, WIPERS, STOOGES, BREEDERS, BOB DYLAN, PEARL JAM and TIFFANY. We also take requests, even if we don't know them! We aim to please.

Sure, it's Thursday night, but it's an early show and you'll still make it home to catch "Will It Float?". Of course, we'll have melted your head and stripped you of all senses, but IT WILL BE WORTH IT.