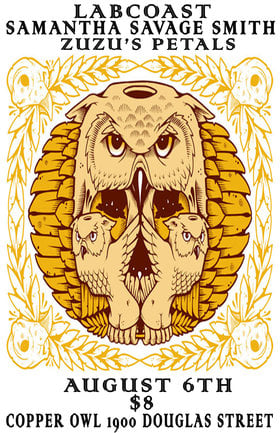 SAMANTHA SAVAGE
http://samanthasavagesmith.bandcamp.com/
Samantha Savage Smith is a singer, guitarist, and songwriter based in Calgary. Upon the release of her debut album Tough Cookie in 2011, the bulk of the critical acclaim it received was rightly placed upon her startling, unique voice. Smith's ability to infuse her tunes with a timeless sense of grace and personality makes it a no-brainer that her influences run the gamut from old masters such as Anita O'Day and Billie Holiday to more recent contenders such as St. Vincent and Kurt Vile.

Tough Cookie was picked up for distribution by Arts & Crafts (home to Broken Social Scene and Feist) and led to two Canadian tours, performances on CBC's Q with Jian Ghomeshi and Canada AM, and two acclaimed music videos (for "You Always Come To Mind" and "The Score"), and Calgarians chose the album as their favorite of the past year in the 2012 FFWD Weekly ‘Best of Calgary’ reader’s poll.

Smith's new songs have achieved the feat of building on the vocal-heavy allure of those on the debut while adding newfound depths and contours to the tunes themselves. Live and in the studio, she's backed by some very fine Canadian musicians, including members of Woodpigeon, Snailhouse, Lab Coast, Friendo, Ghostkeeper, and Chad van Gaalen. The new album, currently in pre-production, is shaping up to be a batch of songs that are as insistently memorable as they are downright singular.

ZUZU'S PETALS
http://zuzus-petals.bandcamp.com/
Indie rock in the same category as Pavement, Yo La Tengo and Magnolia Electric. Smooth jams with poignant song writing. Come and check out these local upstarts at their first ever lounge show!!