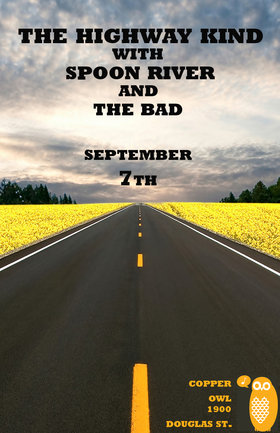 THE HIGHWAY KIND
http://thehighwaykind.bandcamp.com/
http://music.cbc.ca/#/artists/The-Highway-Kind
When it began in April of 2010, The Highway Kind (Matthew Camirand, Cristin Heck, Mark Karpinski) got off to a slow start, only writing and rehearsing during the brief intervals between Black Mountain touring, in which Camirand played the bass guitar. After climbing down the Mountain in January of 2012, The HK were free to roam and set about sculpting an eager, stream- lined and straight forward approach to the classic inspired rock and roll that Camirand was well used to mining in Black Mountain. With a simple bass, drums and guitar power three-o set up and a "don't bore us, get to the chorus" attitude the band has finally dropped with their first proper recording, the 2 song 7" and digital download, featuring the tracks, "Young and Strong", and "Tail Dragger".

SPOON RIVER
http://www.spoonriverband.com/
Following the dissolution of Montreal's infamous Royal Mountain Band into so many beautifully broken pieces, Tavis Triance moved to the Westcoast & he and a host of friends set out to craft a songbook of the death of the hills and the woods and the streets and the streams. Spoon River’s first album was borne of this. Recorded in Montreal and entitled, "Kindgdom of the Burned" it was released on Northern Electric Records in the spring of 2009.

An exploration of British Columbia's coastline from Vancouver all the way up into what would be a two year stay in the small reservation town of Bella Bella in Heiltsuk territory, brought Rachel Horst into the fold and would yield a second collection of songs recorded with the new touring band (including members of No Horses) at Montreal’s Breakglass Studios and at Vancouver's Ogre studios. It will be released in 2013 and is entitled The New Sun Ahhhhh Hotel.

The early songs are adorned with harmonies, pedal steel, bottleneck guitar, wailing off-kilter organs, fuzztones and tremeloes of varying shape and size, all of it belted together by the far off tinkle of piano and wail of harmonica.
The most recent songs are tougher strutting affairs nodding at Link Wray, The Flamin Groovies, The Faces, and mingling these influences with garage rock and neo-psychedelia. Informed by the past but with its feet set squarely in the timeless rivers of the cosmos Spoon River offers up a tributary of sun drenched psychedelic rock n roll.

THE BAD
no links yet
ex-members of NO HORSES

Half-human machine man, and his creaking goats. more info
Submit info on this show to our admins