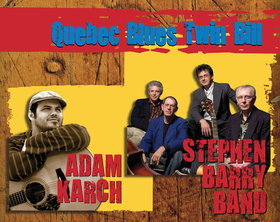 Montreal native, Adam Karch, discovered the guitar at age 12, an instrument that would become his best friend and musical partner. By age 14, he was performing at various festivals and bars, and at 18, he toured Germany, performing with Jeff Healey. His immense talent was noted by famous guitar player and singer, Walter Rossi, who would produce Adam's first album: "Crossroad Diaries." Soon after, Adam began performing solo, where his soulful voice and spirited guitar stylings were highlighted. His voice has often been compared to Colin James and Brian Setzer, but more recently, he has developed a range that is reminiscent of such greats as Van Morrison and James Taylor. In 2011, Karch released his second record, "Cotton Fields," an album that revisits a selection of blues from the 1930’s. Karch and his band stole the stage at the 2012 Vancouver Island Blues Bash, and we had to have him back!

With the help of good buddy, Andrew Cowan(drums), Stephen Barry (bass) has taken some of the best blues musicians that Montreal has to offer in order to assemble one of the finest blues and folk-blues ensembles in Canada. Since their 1975 debut, the group’s reputation has been established by the many accolades that they have received and even more so by having the great privilege of playing alongside a wealth of blues legends, amongst them John Lee Hooker, Bo Diddley, Buddy Guy and Big Mama Thornton – with whom they traveled for over three years. In fact, the Stephen Barry Band has steadily performed on every blues stage in Quebec, Ontario, and the Maritimes. The Band first appeared in Victoria as a preview to the 2011 Vancouver Island Blues Bash.